Home News Already a limited-edition in Europe, Toyota GR86 to be discontinued by 2025 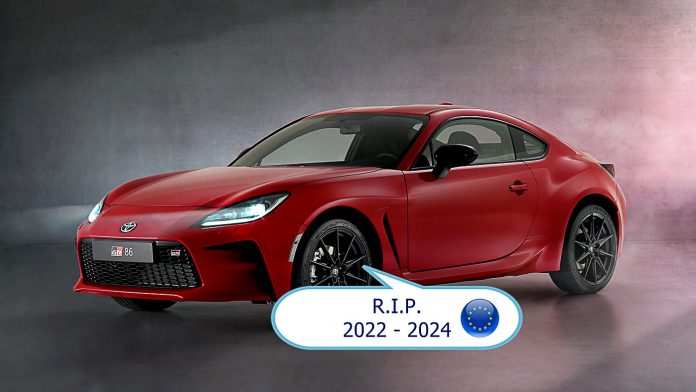 The second-generation Toyota coupe was formally launched in Japan last month and now resources have shifted to Europe, with Toyota previewing the GR86 at its Kenshiki European Forum.

While the specifications of the vehicle have not changed, maintaining its naturally-aspirated 2.4-litre boxer engine with outputs of 234 hp and 250 Nm, Toyota Motor Europe (TME) said it can only offer the GR86 on the showroom floors for just two years.

TME did not disclose the reason for such an incredibly short lifespan for the sports coupe that begins from the first half of 2022. One would assume it could be combustion engines and the associated emissions, but the EU is only banning engines in 2035, some 10 years after the timeline that TME mentioned for the GR86.

You don’t need to wait, as the Toyota GR86 can already be raced in the virtual world of PlayStation and Gran Turismo Sport, today!

As such, Autocar UK suspects non-compliance to new Euro NCAP regulations as the reason for the short two-year sales period. Euro NCAP has introduced a series of technical and non-technical test protocols from 2020, with the most significant being the Mobile Progressive Deformable Barrier (MPDB) crash test, replacing the 23-year-old offset-deformable barrier test.

This new crash test not only evaluates the protection of occupants inside the car but also assesses how the cars’ front-end structures contribute to injuries in the opposing vehicle. Energy levels are significantly higher, as both the subjected vehicle and the barrier are in motion, unlike the older barrier that is stationery.

Made by Subaru, the heavily-revised Toyota GR86 features additional structural bracing and fasteners that increases lateral rigidity by 60% while body twisting rigidity has been increased by 50%, which are essential for corner-carving capabilities but not an offset-crash into an oncoming vehicle.

Although faced with such a short sales window, TME’s vice-president, Tom Fux, told Autocar UK, “We felt that the vehicle is so good and so needed for Toyota’s image in Europe, and we have a small but very passionate group of customers out there who are searching for vehicles like the GR86.”

“In the end, we decided it’s important to offer this vehicle, and then we will need to stop the vehicle because it will not meet the new requirements in the future.”

Available in two transmissions, the manual-equipped Toyota GR86 completes the 0 to 100 km/h sprint in 6.3 seconds, while the six-speed conventional automatic requires 0.6 seconds longer. The time of 6.9 seconds for the automatic is nonetheless still faster than the outgoing 200 hp 2.0-litre model with three pedals thanks to its sheer power and no increase in weight.

For us here in Malaysia, UMW Toyota Motor will most likely introduce the GR86, judging by how successful the sales of GR Yaris and GR Supra were plus the ever-increasing brand awareness of Toyota Gazoo Racing. The model is also not hindered by supply issues, unlike the GR Yaris that was allocated in limited quantities to smaller markets such as ASEAN.