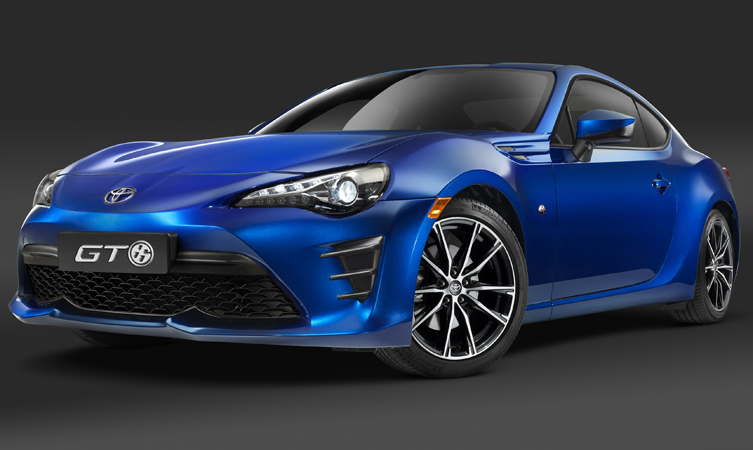 It’s hard to believe that the Toyota 86, also known as the GT86 in some parts of the world, is now four years old, which means it’s about time for give it a new face. The updated model is set to receive a mildly revised exterior look and the long anticipated performance boost.

Externally, the 86 gets a new front bumper, a larger central air intake, revised LED headlights and tail lamps as well as a new 10-spoke alloy wheels. Its cabin gets new leather and Alcantara upholstery which includes soft-touch suede on the door trims. The 86 also receives a new steering design, integrating audio controls and an iconic ’86’ logo in the middle.

While the aesthetic department stirs excitement, the same cannot be said about its performance because the only variant to receive a boost is the six-speeder manual. The 86 is powered by the same 2.0-litre four-cylinder horizontally opposed engine, and in the manual, it makes just 5 additional horses at 205 hp and 212 Nm. The automatic variant settles for the existing output of 200 hp and 205 Nm of torque.

It’s a known fact that the 86 isn’t built for straight-line fun, but widely regarded as one of the best entry-level, pure-bred sports car. With this facelift, the engineers have taken its handling and agility up a notch by revising the chassis setup and tweaked the damper and spring rates.

The updated 86 will make its debut in the upcoming New York Motor Show and will be ready for delivery by Q4 2016. Also, since the demise of Scion in the United States, all existing FR-S models will be rebranded as the Toyota 86.

Back at home, the 86 made a brief appearance through UMW Toyota in 2012 with the manual variant being sold for RM243,000, whereas the automatic costed RM6,000 more. For now, UMW Toyota is only offering the 86 on a special order basis.