The highly successful Toyota GR Yaris is available in almost every market the Toyota operates in, except its biggest- the United States. Why? Well, the whisper surrounding the industry that Toyota will instead create a bespoke GR vehicle using the Corolla hatchback to better suit the local requirements and branding there.

Although the US is an SUV and large pick-up truck dominated market, the Corolla still brings in sales of an average of 130,000 units annually for the past two years, lagging behind the Honda Civic by quite a steep margin. Thus, a hot Toyota Corolla with all the performance and technology can better create image and association with consumers rather than the now-discontinued Yaris, which is actually a rebadged Mazda 2 from Mexico.

In this single Instagram posting by Toyota USA, nobody in the motoring content industry picked it up as it looks like a regular interior of the Toyota Corolla. However, the nerds in the GR Corolla forum noticed a few things abnormal in this particularly old image (they have seen it before).

The first item that caught the eye of the forumers was the digital clock in the instrument panel, showing ‘G:16’, indicating the engine code of G16E-GTS for the turbocharged three-cylinder engine displacing 1.6-litres.

The nerds then associated temperature settings on the air-conditioning switch panel that readout ‘72 68’ with the engine output of 268 bhp (272 hp) found in the Japanese-market Toyota GR Yaris. The next easter egg seems farfetched, especially in the low-resolution image, but the eagle-eyed readers managed to decipher the pixelated text in the navigation screen as ‘GR Four’, the high-performance 4WD system in the GR Yaris.

The Toyota GR Yaris is truly a hot hatchback very worthy of its glory and status. Find out what Eujin has to say while enjoying it at Sepang Circuit!

Finally, the one easter egg that verified that the forumers are indeed leading to something substantial, is the little car in the background. It is certainly not a random vehicle in the background, as the colour, or rather, the camouflage wrapping the vehicle is the same pattern used on the teaser images of the Toyota GR Yaris and GR Supra.

There we have it, thanks to dedicated customers of Toyota models in the USA, we finally have confirmation that the Toyota GR Corolla is happening for the folks in the US. It’s something to finally give the Honda Civic Type R, Ford Focus RS, Volkswagen Golf GTI, Hyundai Veloster N and other hot C-segment models a good battle. 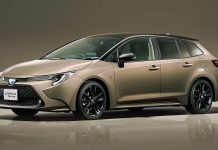