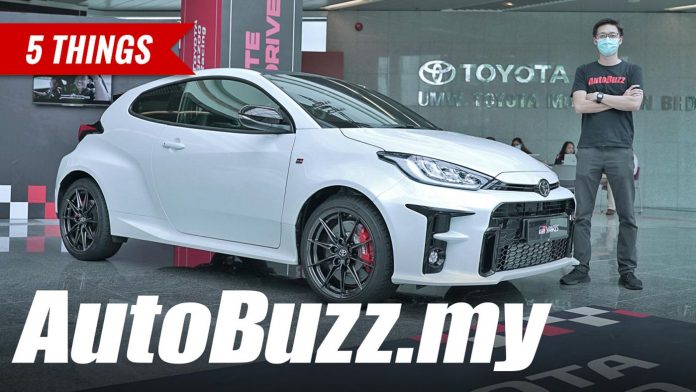 That’s right guys – our prayers have been answered. The critically-acclaimed Toyota GR Yaris has finally made its way here in Malaysia, and we were given the chance to take a look at it first-hand to bring you everything you need to know.

First-off, the design of the GR Yaris is based on the global TNGA-based Yaris hatchback, and not the one we get here in this region. However, aside from just the general looks (where there already aren’t that many resemblances), everything else is pretty much tailor-made exclusively for this WRC homologation special.

Most of the body panels are made of aluminium and carbon fibre to keep the weight down, while the chassis has also been customised specifically to the GR Yaris catering to its all-wheel drive drivetrain with a double-wishbone suspension set-up at the rear.

The hot-hatchback is powered by a 1.6-litre 3-cylinder turbocharged, which Toyota says is the most-powerful 3-cylinder engine ever in production. Output is rated at 261 hp and 360 Nm of torque, with power sent through a six-speed Intelligent Manual Transmission for a 0-100 km/h time of 5.5 seconds, onward to a electronically-limited 230 km/h top speed.

The all-new Toyota GR Yaris is now available in Malaysia in limited quantities (less than 200 units for our market!), and can be yours for RM299,000 at all Toyota GR Garage dealerships nationwide.