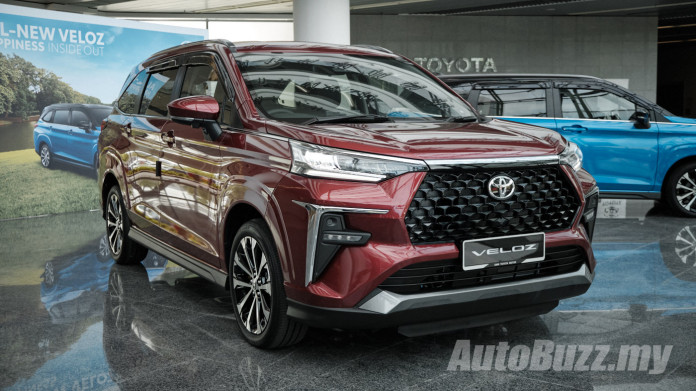 Exactly two months after the Perodua Alza made its debut, UMW Toyota Motor has now officially launched the Veloz here in Malaysia. Available in one single variant, the 2022 Toyota Veloz in Malaysia is priced at RM95,000 on-the-road and without insurance, making it nearly RM20,000 dearer than the range-topping Alza.

You do get quite a bit for that extra dough, however, starting with the Veloz’s unique front end design, characterised by the narrower hexagonal front grille, sharper LED headlights, taller fog light housings, and a lot more chrome all around the outside.

Round the back, the Veloz also gets a unique full-width tail lights treatment, while the taller ride height (190 mm vs 160 mm for the Alza), larger 17-inch alloy wheels (Alza only goes up to 16 inches), and low profile roof rack (up to 75 kg load) gives it a more SUV-like appearance.

Despite the identical dashboard architecture on the interior, the premium feel of the Toyota Veloz is immediately noticeable thanks to the additional soft touch paddings on the dashboard. The white-and-black two-tone colour scheme is also standard on the Toyota Veloz, as is the “blueish” ambient lighting system and semi-leather upholstery.

The nine-inch central infotainment display, seven-inch digital instrument cluster, and electronic parking brake are shared with the Alza, although the Veloz does get an additional automatic air-conditioning system, telescopic steering wheel adjustment, as well as a Qi wireless charging tray on the centre console.

Other standard interior features include:

The Toyota Veloz shares the same powertrain as the Perodua Alza, consisting of a 2NR-VE 1.5-litre naturally-aspirated inline-four engine, making 105 hp and 138 Nm, and a D-CVT gearbox. Unlike its predecessor, the all-new Toyota Veloz now sends its drive to the front wheels.

Drivers can switch between three drive modes from the steering-wheel buttons; PWR (power) mode helps improve the car’s acceleration and responsiveness, while ECO aids in fuel-saving. NORMAL mode meanwhile offers a balance of economy and performance, according to Toyota.

The 2022 Toyota Veloz in Malaysia will come equipped with the Toyota Safety Sense advanced driver assistance features, which includes the following features:

Also included as standard is the Vehicle Telematics System (VTS) which allows the owner to keep track of their vehicle’s location at all times via a mobile app. Should the vehicle be stolen, customers can also contact a Command Centre via the app to locate the vehicle via GPS signals, and inform the relevant authorities who can retrieve the vehicle.

Also included in the price is a five-year/unlimited mileage warranty, as well as the 24SEVEN Road Assist which includes complimentary assistance in case of accidents, as well as free minor on-the-spot repairs, and towing up to RM400 in value each time.