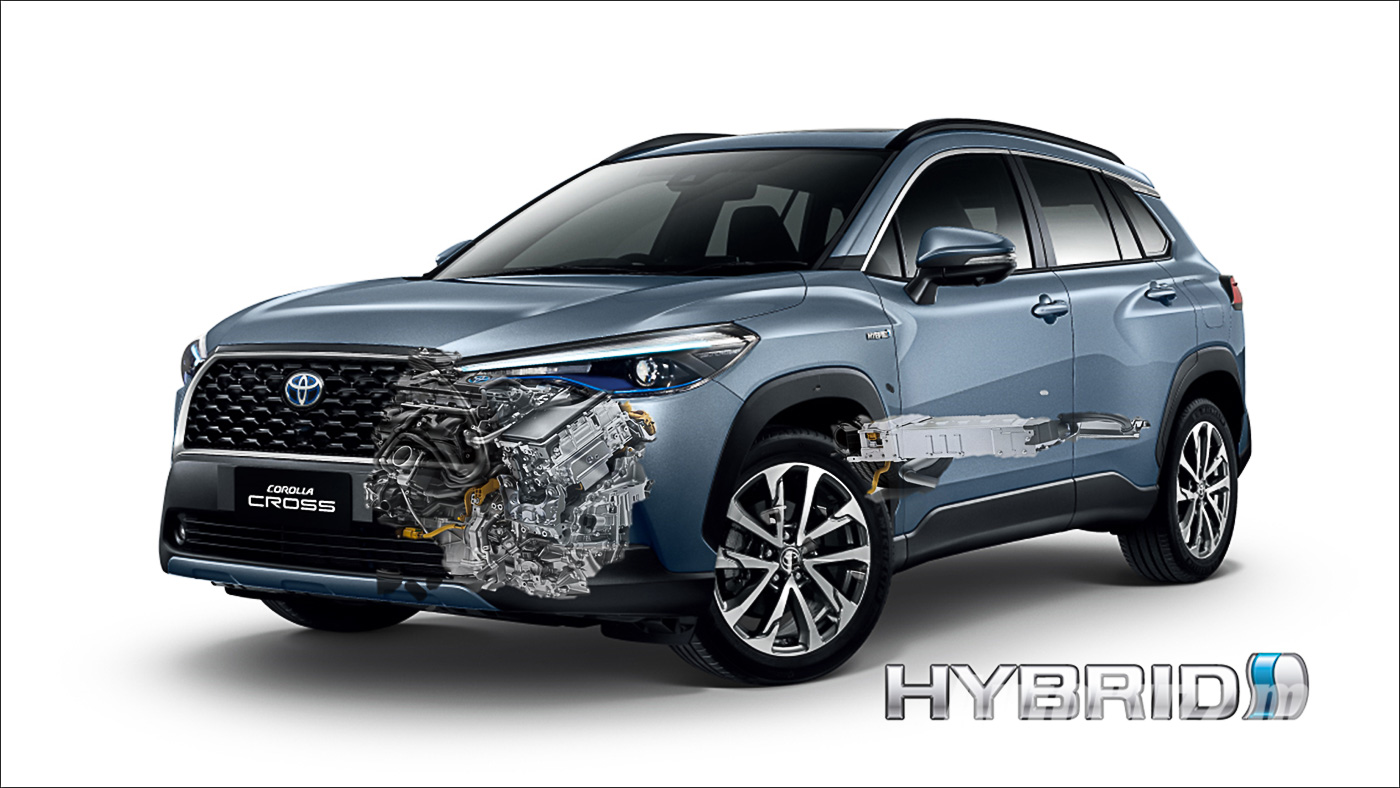 In the build-up to the official announcement of the Toyota Corolla Cross Hybrid, UMW Toyota Motor (UMWT) made some videos regarding the benefits of the hybrid system.

The models were all introduced thanks to government incentives that exempt all import and excise duties (100%) for hybrid vehicles from early 2010 to 2013. Incentives for CKD models such as the Camry Hybrid continued.

The Toyota Corolla Cross Hybrid has been on sale in Thailand, Vietnam and the Philippines since their respective launches, thus, it’s fair to assume the hybrid system will be the same in Malaysia given the similarities in regional requirements and resources- discounting the more powerful 184 hp 2.0-litre Hybrid Dynamic Force system.

The hybrid system in the Toyota Corolla Cross Hybrid is taken straight from the fourth-generation Toyota Prius and Toyota Corolla Hybrid, as all these three models are built on the TNGA GA-C platform.

The engine features a heavily revised naturally aspirated Atkinson-cycle 1.8-litre engine (2ZR-FXE), with new materials and design to make the engine quieter, smoother and breathe better to hit thermal efficiency of 40%. Output is modest and unchanged, 97 hp at 5,200 rpm and 142 Nm at 3,600 rpm, as the engine is only tasked to charge the battery and move the vehicle with additional power supplemented by the electric motor.

The pair of electric motor-generator units (called MG1 and MG2) are made smaller and lighter to suit the new multi-shaft transaxle design. It sees a reduction in outputs, from 82 hp / 207 Nm to 72 hp / 163 Nm.

The battery in the Toyota Corolla Cross Hybrid continues to maintain the air-cooled NiMH battery pack but has been made more compact, yet more energy-dense, giving better performance and easier packaging — now located entirely beneath the rear seat, avoiding any compromise in luggage space and utility.

Newer but lower output than before, but why?

Toyota does not numerically add the peak engine power of 97 hp with the peak motor power of 72 hp. Instead, the company says based on internal measurements, the combined system output is 122 hp at 5,200 rpm and not 169 hp, as the peak power of both energy sources occurs at different speeds. Toyota also does not document the combined torque figures, unlike the Honda e:HEV system which can be 100% electric motor driven and thus quote a high figure of 253 Nm.

The new power control unit (PCU) allows the system to draw more on its electric power, which means that acceleration feels more natural with the engine-rpm building gradually as the car picks up speed, rather than a constant engine speed and the drone of the older system.

Acceleration from 0 to 100 km/h takes 11 seconds in the 122 hp Toyota C-HR Hybrid – a car similar in size and weight as the Toyota Corolla Cross Hybrid. The top speed is capped at 170 km/h.

Check out our initial impression of the Toyota Corolla Cross 1.8 here!

And yes, even electrified, the hybrid system has a lower output than the 1.8-litre petrol engine that churns out 139 hp, but at a rather high peak engine speed of 6,400 rpm.

The Corolla Cross Hybrid has, however, traded less horsepower for better fuel consumption figures; rated at 4.3 L/100 km while the regular engine returns 6.8 litres per 100 km travelled, both figures based on certificates from Thailand.

How does the Toyota Hybrid system operate?

As Honda is pushing the e:HEV hybrid system into various B-segment models, the latest being the all-new HR-V model launched in Thailand, we thought we might take a quick recap on how the Toyota hybrid system differs from the Honda system.

The Toyota hybrid system has a much smaller electric motor output, as such, it will only operate in electric vehicle (EV) mode at very low speeds as such parking and crawling in traffic jams. The petrol engine will switch on to provide drive to the front wheels as well as charge up the NiMH battery pack, a situation that occurs for the majority of the driving speed.

The petrol engine will then switch off at every release of the accelerator pedal, when the PCU deems no power or forward motion is needed. The motors then become generators to charge the battery.

The hybrid system in the Honda e:HEV meanwhile features a much more powerful electric motor as well as a disconnecting clutch, which decouples the engine from the wheels, making the system more efficient. The petrol engine is only connected at highway speeds, while the rest of the drive is mostly performed by the electric motor, and the engine just functioning as the battery charger- a term called series-hybrid like Nissan’s E-Power system and Daihatsu’s e-Smart Hybrid.

As such, based on information we have, the electric motor and petrol engine never ‘blends’ their power together to drive the front wheels; it’s an either-or setup. The previous generation i-DCCD sport hybrid system with a dual-clutch transmission however blends both the power outputs and is available in the outgoing Honda HR-V hybrid priced at RM114,000.

UMWT has just opened the order books for the new Toyota Corolla Cross Hybrid, with an estimated price of RM137,000. As for Honda, the e:HEV hybrid system is currently available in the Honda City RS, priced at RM105,000, and will be joined by the Honda City Hatchback RS e:HEV soon.