Home News The updated Nissan Kicks might be the brand’s most exciting car we’ve... 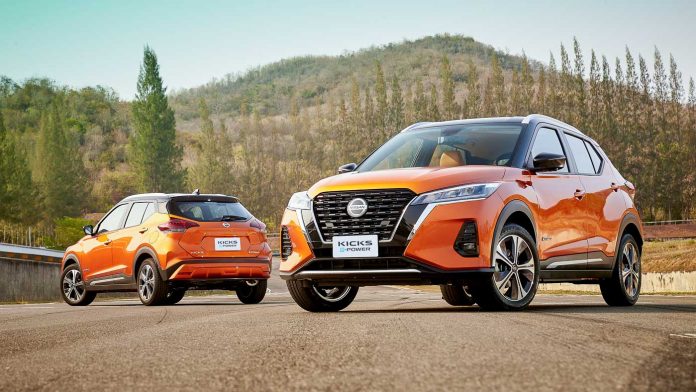 After a short period of slump, Nissan seems to have found their footing again with their latest models. The latest Sentra/Sylphy and Almera wowed everyone with their attractive styling, but we think that the updated Nissan Kicks might have just taken the cake for the most exciting Nissan car we’ve seen in a while.

And that’s because underneath the hood of the updated B-Segment crossover is Nissan’s e-Power hybrid drive technology, making it one of the first few global Nissan products to carry the technology. With the new Kicks, Thailand also becomes the first country outside of Japan to manufacture e-Power technology-equipped cars.

Unlike regular hybrid vehicles, the new Kicks is essentially an electric vehicle with a built-in battery-charger. The 1.2-litre three-cylinder engine helps charge the 1.57 kWh lithium-ion battery, which in turn powers the electric motor generating a peak output of 95 kW (129 hp), and a flat-torque of 260 Nm.

Thanks to the unique powertrain set-up, the electric motor is able to utilise extra electrical power from the engine when needed, in addition to the battery, resulting in better acceleration. The new electric drivetrain also allows the drivers to use the One-Pedal driving function, as seen on the Nissan Leaf.

The front bumpers have also been sculpted to complement the new larger grille, while the rear bumper gets a slight update with less black plastic trims. As with its predecessor, the black-painted pillars give the compact crossover a “floating roof” design.

Inside, the dashboard architecture remains pretty much unchanged, barring a slightly-modified steering wheel, and a redesigned centre console to house the new electric shift module.

Other items on the interior equipment list include the eight-inch infotainment system with support for Apple CarPlay, a seven-inch digital information display on the instrument cluster, Intelligent Rear View Mirror, as well as the jazzy dual-tone leather upholstery.

The new Nissan Kicks e-Power is now on sale in Thailand, with prices starting at 889,000 Baht (RM121,140). Hopefully the updated Nissan Kicks will make its way onto our shores this time round!