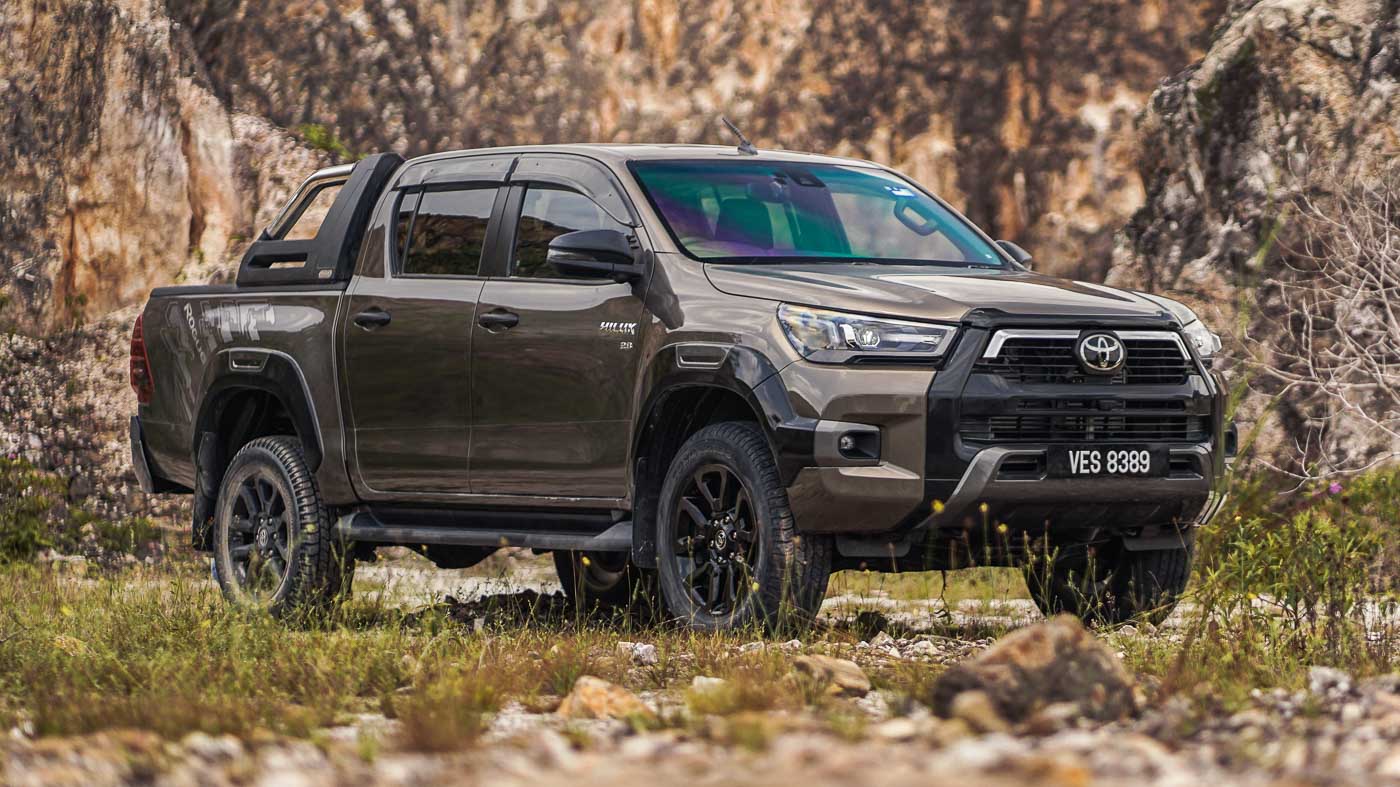 Shortly after its global introduction in June this year, UMW Toyota has now introduced the updated 2020 Toyota Hilux facelift here in Malaysia. Now in its second facelift for the eight generation pick-up truck, the Toyota Hilux will be offered in five different variants (2.4 single cab MT, 2.4E, 2.4G, 2.4V, and Rogue) , with prices starting at RM93K for the workhorse single cab variant.

The main difference to the exterior styling of the 2020 Toyota Hilux is at the front, characterised by a larger three-dimensional hexagonal grille design, and flanked by the slimmer headlights with a completely new illumination architecture. Further down, the bumper has also been completely redesigned, with new fog lamps housing at the side.

The range-topping Rogue variant, along with the 2.4V variant, does get quite a bit more exterior pizzass. These include Bi-LED headlights and daytime-running lights, as well as LED taillights – the latter being brought forward from the previous generation in the lower variants.

On the Rogue variant, the exterior flair is brought to a whole other level with a much more aggressive front-end design, featuring a darkened grille that extends over the entire height of the front fascia, along with more prominent skid plates and fog lamp housing trim that extends to form the over fenders on the wheel arches.

The rogue variant also gets exclusive matte-grey coloured wing mirrors and door handles, as well as the tailgate garnish and body-coloured bumpers at the rear. All variants receive newly-designed 17- and 18-inch wheels with new finishes.

Two engine options are being offered on the 2020 Toyota Hilux facelift – 2.8-litre and 2.4-litre turbodiesel mills. While the engines are inherited from the outgoing model, they both receive a number of upgrades in this facelift update, though only the 2.8-litre engine on the Rogue variant gets a bump in power output.

In terms of upgrades, both engines have been fitted with a new Variable Nozzle Turbocharger (VNT) with new pre exhaust gas recirculation (EGR) intercooler, as well as an increased common-rail fuel injection pressure. Aside from the power output gain on the 2.8-litre engine, both engines now boast enhanced fuel efficiency, with a 4% improvement on the 2.8-litre, and 5% on the 2.4-litre.

As a result of these new upgrades, the service interval for the Hilux has also increased from 5,000 km/3 months to 10,000 km/6 months, helping the owner to reduce overall cost of ownership.

Other mechanical upgrades include a new Variable Flow Control (VFC) steering rack which alters the weight of the steering depending on speed, as well as a reworked suspension setup with retuned dampers, leaf suspension mounts, and cabin mounts for improved comfort on the road.

The Rogue and 2.4V variant also gets a new automatic limited-slip differential (Auto LSD) on the rear axle to help with traction in 2WD mode, working in conjunction with the improved active traction control system.

While overall interior architecture is pretty much identical to the outgoing model, the 2.4V and 2.8 Rogue variants do receive a couple of updates to improve the overall premium experience of the cabin. These include:

The new instrument cluster and infotainment display is also available on the 2.4G MT variant, while the 2.8 Rogue variant gains additional ambient lighting on the door trims – though only in blue colour.

The Rogue and 2.4V variant also gets a blind spot monitor with rear cross traffic alert (optional on 2.4G and 2.4E), seven airbags, and reverse camera (optional upgrade to 360-degree surround view monitor), and Vehicle Telematics System, though the Downhill-Assist Control system is only reserved for the Rogue variant.

Otherwise, standard safety equipment on the 2020 Toyota Hilux facelift (except Single Cab 2.4) include:

Prices mentioned above are on the road prices, without insurance. Included with each purchase of the new Toyota Hilux is a five-year/150,000 km warranty. For customers buying the 2.8 Rogue variant, UMW Toyota is also offering an early bird discount of RM2,000 (RM144,880) for all purchases made in 2020.

a Toyota Service Savers package is also available for the 2020 Toyota Hilux, which promises savings of up to 13% during regular vehicle servicing, and discounts of up to 20% on selected items and parts replacement.

Available from RM3,580, with packages available for a period of five or three years, the cost of the package can be included directly into the financing scheme as part of the vehicle cost. The service maintenance package can be used at any authorised Toyota service centre nationwide.