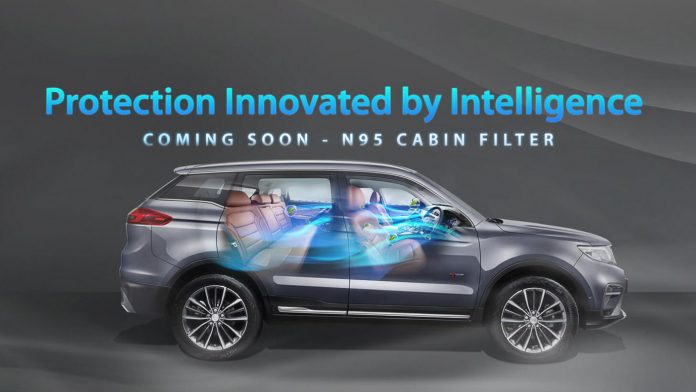 Proton has announced that they would resume operations beginning tomorrow, 5th of May 2020 and this applies to the sales and service outlets located in the Green and Yellow Zones. Operations will also resume at the production plant in Tanjung Malim and the Centre of Excellence with new work practices in place.

Interestingly, Proton also announced on its official site that the next iteration of the CKD Proton X70 will feature an N95 Cabin Filter – just three months after the CKD model we tested with a new 7-speed dual clutch gearbox was launched in February. Current and the earlier batch of X70s can be retrofitted with this.

In February this year, Geely also announced that all their new cars will come equipped with the Intelligent Air Purification System (IAPS) beginning March 2020 – a system the company took only 20 days to develop in light of the Covid-19 pandemic that brought China to its knees.

The IAPS comes with a new advanced active carbon chemical filter that absorbs harmful gases such as formaldehyde as they enter the cabin. The filter is not only capable of blocking out odour and harmful pollutants but also sterilise and deodorise the cabin in order to eliminate airborne viruses, bacteria and fungi.

As such, the IAPS can achieve the same level of air filtration as an N95 respiration system. In fact, Geely says the N95-certified IAPS can isolate and eliminate over 99.7% of dust and harmful particulates including bacteria and viruses in the cabin.

At the height of the Covid-19 pandemic in China, Geely introduced the new IAPS feature in 150 Geely Jiaji MPVs which were given to support the frontline workers.

The new system was developed under the Geely Healthy Car programme where the company has pledged to invest 370 million RMB into the development of “healthier vehicles” in three phases. The first phase has already been initiated with short terms solutions such as the IAPS.

In Phase Two and Three, Geely will be looking to partner leading medical agencies to develop “clean materials” for interior and exterior components such as switches and door handles – areas most prone to harbour bacteria and viruses.