The BMW M440i was officially teased last week and according to foreign reports, BMW invited a group of selected medias to stretch its legs on the Autobahn, where they topped out the prototype at 280 km/h! It’s also led us to this, a glimpse of what to expect from the flagship model (for now).

Based on the video by BMW BLOG, the new 4 Series which will likely adopt the controversial grille as seen on the Concept 4 Series Coupe shown at the Frankfurt Motor Show last year, does not appear that much larger than its predecessor but BMW have suggested that it would be longer, wider and sits nearly 60 mm lower than the 3 Series.

More importantly, the M440i sounds good; with raspy exhaust notes to leave us with plenty to anticipate and be excited about. The video also shows how rapidly the M440i xDrive accelerates – even more so in Sport + mode! Although it’s still just a prototype, suffice to say it’s already a strong indicator of things to come.

With more than half a year before it will be officially unveiled according to Autocar, only two variants have been confirmed so far – the 430i and the M440i xDrive. The latter makes 374 hp and 500 Nm of torque, most likely from BMW’s B58 3.0-litre turbocharged straight six. The 430i on the other hand, will get 258 hp and 400 Nm from a 2.0-litre turbocharged 4-cylinder.

The M440i xDrive will also feature 48V mild hybrid technology with a 48V starter-generator and a second battery to offer 11 hp of extra boost. Power is transferred to the road via an 8-speed Steptronic Sport gearbox while the M Sport differential helps ensure that power is delivered in the most optimum way. This video of the BMW M1 on a hill climb will blow your mind and ear drums! 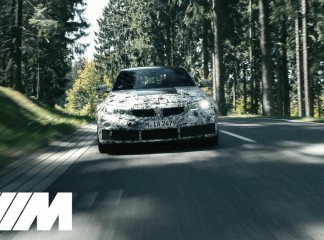