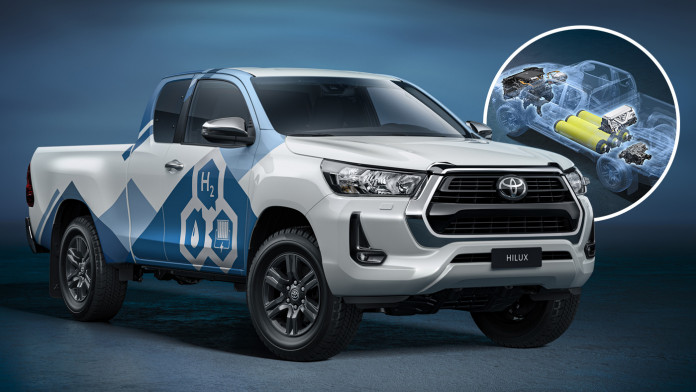 Toyota Motor Manufacturing UK has received funding from the UK government to develop a hydrogen fuel cell (FCEV) Toyota Hilux prototype. The funding was received through the Advanced Propulsion Centre (APC) for zero-emissions vehicle development, and the Hydrogen-powered Hilux will be produced in the UK in 2023.

The Japanese carmaker has been known for taking a multi-path approach to carbon neutrality by offering all electrified vehicle technologies including Hybrid Electric, Plug-in Hybrid Electric, Battery Electric, and Fuel Cell Electric. Toyota’s famous hydrogen fuel cell car is the Toyota Mirai. As such, the prototype Toyota Hilux will use the same second-generation Toyota fuel cell components as the Mirai.

Joining Toyota in the development of the Hydrogen fuel cell Toyota Hilux are UK-based technical engineering partners. These include Ricardo, ETL, D2H, and Thatcham Research.

Toyota Motor Europe (TME) R&D will provide expert technical support to enable the UK-based teams to build its own expertise and self-sufficiency to develop next-generation hydrogen drivetrain capabilities. If the prototype is successful, Toyota targets to prepare for small series production of the Hydrogen fuel cell Toyota Hilux.

Toyota Motor Europe President & CEO, Matt Harison said, “The UK is one of the key markets for pick-up trucks and is an important market for Toyota. This funding represents a tremendous opportunity to develop a zero-emission solution in a critical market segment. We would like to thank the UK Government for the funding that will enable the consortium to investigate the development of a fuel cell powered powertrain for the Toyota Hilux, supporting our carbon neutrality ambition.”

In Malaysia, the Toyota Hilux is the most popular pickup truck, with its name being used to label the entire segment. There are two engine options in Malaysia which are the 2.4-litre turbodiesel and the 2.8-litre turbodiesel engines. With East Malaysia being the ‘land of pickup trucks’ and also focusing on hydrogen fuel cell vehicle technology, the hydrogen fuel cell Hilux might just be perfect for the region.