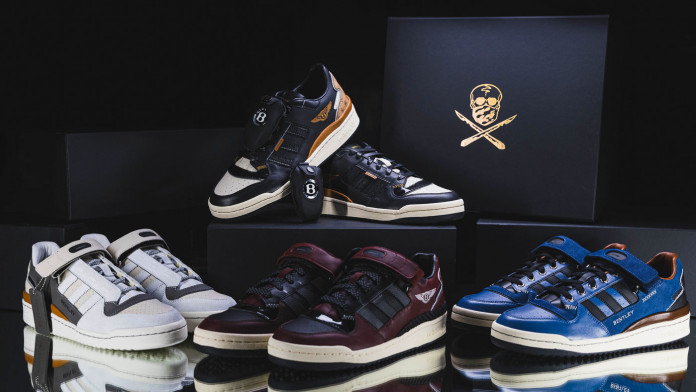 The assimilation between car brands and lifestyle and popular culture is becoming ever more common. Now, even Bentley is releasing their own line of limited edition sneakers, thanks to a new partnership with Dominic Ciambrone, the man behind the sneaker customizing brand The Surgeon.

Together, they’ve created a collection of three sets of shoes; all of them based on the Adidas Forum Low sneaker, but modified to feature Bentley-specific design language such as the diamond quilting and cross stitching, and even use the same leather hides as the carmaker themselves. But if you think you can just buy one for collection, tough luck – they’ll only be sold exclusively to Bentley Mulliner customers.

The collaboration began early this year, when Ciambrone visited Bentley’s headquarters in Crewe, England, to “immerse himself in the luxury British brand” while exploring the materials and elements used in Bentleys. The partnership also tapped into Bentley Mulliner’s expertise to best replicate the additional Bentley design details on the sneakers themselves.

Each of these pairs of shoes are said to be inspired by a specific model within the Bentley model range. The first set of two, featuring a Titan Grey and Cricket Ball deep red colour palette, are designed to mimic the athletic stance of the Bentley Continental GT Speed. Meanwhile, the Portofino blue pair with Saddle coloured details is made to evoke the “wellbeing focus” and “relaxing” vibe of the Azure range of models, more specifically, the Bentayga Extended Wheelbase Azure.

The final and most special one, is a unique one-of-one pair made specifically to complement an upcoming bespoke Mulliner collaboration car, which will be unveiled in December at Art Basel Miami. Sold together with the shoe, the car will feature a Beluga Black and Anthracite Dark Gray exterior, paired to a Linen and Beluga interior.

“Creativity and bespoke design is consistently woven into our DNA and has been since 1919, especially as it relates to our private coachbuilding division of Mulliner,” said Bentley Americas President and CEO, Christophe Georges. “Connecting and producing with a like-minded creative like The Surgeon is not only rewarding but also exciting to watch as we support the next generation of diverse craftspeople who share similar brand values.”