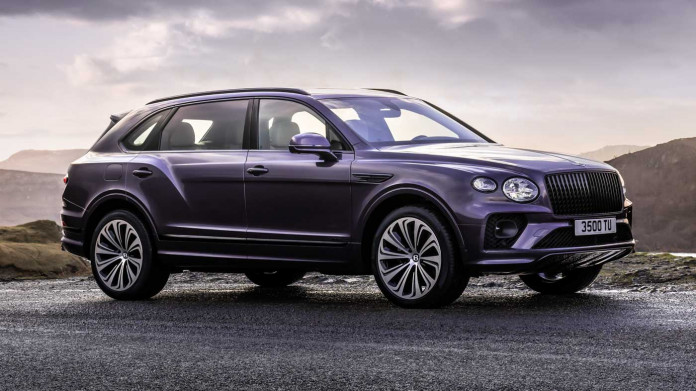 Bentley Motors has extended its model range to now include the new flagship Bentayga Extended Wheelbase (EWB) after a nine-figure investment to create a new model with the best rear cabin experience since the Bentley Mulsanne. The company has high hopes for the model too; projecting the new Bentayga EWB to account for 45% of all Bentayga sales when it goes on sale later this year.

On the topic of rear cabin experience, the Bentayga EWB has extended the standard wheelbase by an extra 180 mm, stretching it from 2995 mm to 3175 mm, with an overall length of over 5300 mm. Despite the increased length of the rear doors, Bentley has ensured that the lines and proportions of the Bentayga Extended Wheelbase are not affected.

Inside, the new Bentley Airline Seats are the most advanced seats ever fitted to a car, with 22-ways of adjustment and the world’s first auto climate sensing system and postural adjustment technology.

The auto climate seat technology senses occupant temperature and surface humidity and then determines whether to apply heat, ventilation, or both simultaneously to keep the occupant at optimum comfort. Meanwhile, the postural adjustment system automatically makes micro-adjustments to the occupant’s seating position and pressure points, by measuring pressure across the seat surface.

The system can apply 177 individual pressure changes across six fully independent pressure zones over a three-hour period throughout a journey. Imagine what long road trips would be like in the Bentayga EWB!

New features also include the Bentley Diamond Illumination where light is emitted through the leather door trims using LEDs (12 on each of the front doors, 22 on each of the rear doors). Also new is the rear-wheel steering for a 7% smaller turning radius, power closing doors that allow users to close the doors with the push of a switch, along with heated rear doors and centre armrests.

Further enhancing the rear cabin section, the longer door trims have been redesigned, with the use of Metal Overlay for the first time; a privilege previously only offered to the Continental GT Mulliner.

The exterior changes can be seen on the new front grille, new 22-inch 10-spoke wheels, and a sunroof that’s been pushed further back due to the extended length of the luxury SUV.

RELATED: The Bentley Bentayga Mulliner is probably the single poshest SUV around