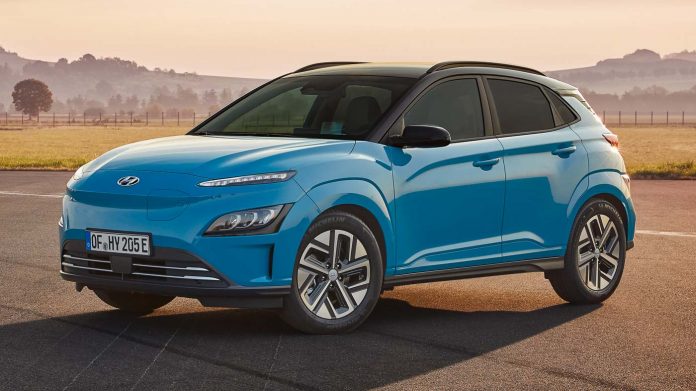 Hyundai-Sime Darby Motors today confirmed that the Hyundai Kona Electric will make its Malaysian debut by the end of November, making it the first fully-electric model from the Korean brand to be officially launched on Malaysia soil.

The Hyundai Kona Electric will be offered in two variants – a long-range variant juiced by a 64 kWh battery, offering up to 484 km of driving range on a single charge (WLTP test cycle), and a smaller 39.2 kWh battery version with a driving range of 305 km.

No matter the battery size though, both variants will be powered by the same single electric motor set-up, offering a maximum power output of 204 hp and 395 Nm of immediate torque. Translating that to actual performance means a century sprint time of just 7.9 seconds.

The facelift Hyundai Kona Electric has already been spotted in Malaysia… at the most unlikely place! Check it out here.

Hyundai says that the lithium-ion polymer battery pack takes approximately 47 minutes to charge from 10 to 80% on both batteries using a 100 kW DC fast charger.

However, it can also charge at a pretty decent rate at home (via a dedicated wall box) or at public AC chargers, thanks to the on-board three-phase 11 kW AC charger – four hours and 20 minutes on the 39.2 kWh variant, and six hours 50 minutes on the larger 64 kWh battery.

The sportier Hyundai Kona N Line was also launched here in Malaysia back in June this year! Check it out here.

Design wise, the Kona Electric is based on the facelift Hyundai Kona that was launched here in Malaysia earlier this year, which means it gets the reworked headlights and tail lights, alongside new bumpers and wheel designs.

“With the newly announced import and excise duty exemptions, we envisage greater interest in EVs in Malaysia. The arrival of the Kona Electric is timely as it will provide more choice for consumers who want a more sustainable and greener ride option to help reduce carbon footprint,” commented HSDM Managing Director, Low Yuan Lung.

The new Hyundai Kona Electric is estimated to start under RM150,000 for the base model thanks to the recently-announced tax exemptions for BEVs, and is now available for booking via Hyundai’s online shopping platform, Cl!ck to Buy, linked here.