In a shocking announcement last week in conjunction with the launch of the Acura NSX Type S, Acura is not providing any new information regarding the reintroduction of the new Integra model.

When prodded by Motor1.com, a spokesperson from Acura wouldn’t confirm nor deny the aspects of the compact and sporty nameplate model. A coupe, a sedan or even a hatchback can be possible for the new Acura Integra. Well, thank goodness it is not another crossover or SUV.

This dogfight with a Porsche 911 GT3 RS at Sepang is the reason why many are excited by the Integra name! Watch it here!

Acura, the luxury arm of Honda in similar positioning as Toyota’s Lexus, Nissan’s Infiniti and Hyundai’s Genesis, currently offers a line-up of just four mass volume models- two sedans and two SUVs. The ILX sedan, built from the Honda Civic underpinnings, is meant to compete with that segment of vehicles plus Mercedes-Benz A-Class and Audi A3.

Unfortunately, the ILX is also the lowest contributor to sales (excluding NSX as it is already a low volume product), giving just 10% to Acura 2020 sales of 137,000 units. Dealers of Acura heavily depend on sales of the RDX and MDX SUV models, which combined a total of 100,000 units sold last year.

As such, news portals in the USA, where Acura is only available, believe that the new Integra will use the underpinnings of the latest 11th-generation Honda Civic and replace the ageing ILX sedan. Acura dealerships also leaked about a new ‘Type S’ compact sedan (before the global pandemic intensified) in the pipeline, suggesting that the new Integra will not continue to be a 3-door product like its predecessor.

Honda is teaming up with America’s GM to produce their first electric SUV. Find out what it’s called here!

Acura used the Integra name on their compact, entry models from its first generation in 1986 to the third generation that ended in 2001. The third generation also introduced the Type R name into the US, with the model featuring a hand-built 1.8-litre engine delivering 195 hp and high-revving excitement. In 2019, a one-owner white 1997 Acura Integra Type-R sold for a record USD82,000 (approx RM340k) at an auction, almost four times the original price when new.

The RSX nameplate then took over for just one generation, for the final model from 2002 to 2006. The compact sporty model was also discontinued as Honda ended the life of the Honda Integra DC5 generation.

Acura has scheduled Spring 2022 as the expected delivery date of the new Integra. 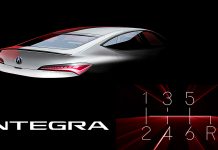