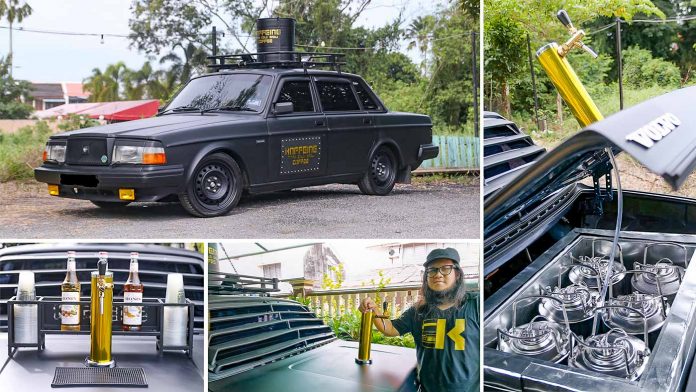 When the Covid-19 pandemic hit last year, the Malaysian F&B industry basically slowed down to a grinding halt. Many business owners unfortunately had no other choice but to give up on their dreams in search for stability. But, as the saying goes – when the going gets tough, the tough gets going; for some people, it’s when they’re faced with hardships like these that they truly shine.

Meet Muhammad Safwan Subry, a food truck operator from Alor Setar, selling a variety of food and drinks out of a (super-cool!) modified school bus. When the Movement Control Order (MCO) came into effect last year, though, the café that his food truck is stationed at had to be temporarily shut down.

At that point, Safwan had two choices – sit around and wait with the uncertainty of when businesses will be allowed to reopen, or pivot and find new ways to serve his loyal customers.

Have somewhere to go while we’re still in MCO? Here’s everything you need to know about essential travels!

Thus, pivot he did. And what Safwan managed to come up with was nothing short of ingenious – if delivery services were still allowed to operate, what’s stopping him from carting fresh nitro cold brew coffee directly to his customers? With that idea in mind, he immediately went to work in search of a mobile coffee delivery vehicle.

Safwan’s requirements were simple – spacious boot, and cost-effective to maintain. Being a classic car fanatic himself, his obvious choices were cars such as the W126 and W140 Mercedes-Benz S-Class. But when he saw a used 1985 Volvo 240GL for sale in such a pristine condition, it was just an opportunity too hard to pass up.

The classic Volvo cost Safwan RM3,000 to purchase, and he has sunk another RM10,000 into the car, modifying it to fit his needs with items such as a bona fide nitro cold brew pressurised tank and delivery system in the boot. A tap is installed above the boot lid, where Safwan can serve his customers directly.

Speaking of coffee, these might just be the most elaborate coffee machines ever – inspired by automotive engines!

Aside from functional mods, he also gave the Volvo 240GL a coat of matte black vinyl wrap, the same colour theme that’s also used on his school bus food truck. Completing the gangster-esque looks are the louver blinds for the rear windscreen, and a retro cargo rack above the roof, where a decorative oil barrel carries his brand logo.

In line with the colour theme of his business, the nitro coffee tap was also painted in a shiny gold colour, making it a pretty unique sight – especially when you see it driving around town!

“I love old-school cars; not only because their spare parts are affordable, but I think they’re also the perfect match for coffee”, Safwan told us in an interview. Following the success of the Volvo 240GL, Safwan plans to expand his business nationwide by building a nitro cold brew car for every state in the country, and of course, using a different old-school classic for each build.

If you’d like to support Safwan and his Kaffeine Foodmachine, be sure to check him out on his Facebook and Instagram page. For the Alor Setar locals, the school bus food truck is stationed at Kafe Adik Kakak, and is open from Tuesdays to Sundays, 4.30 pm to 9.30 pm.