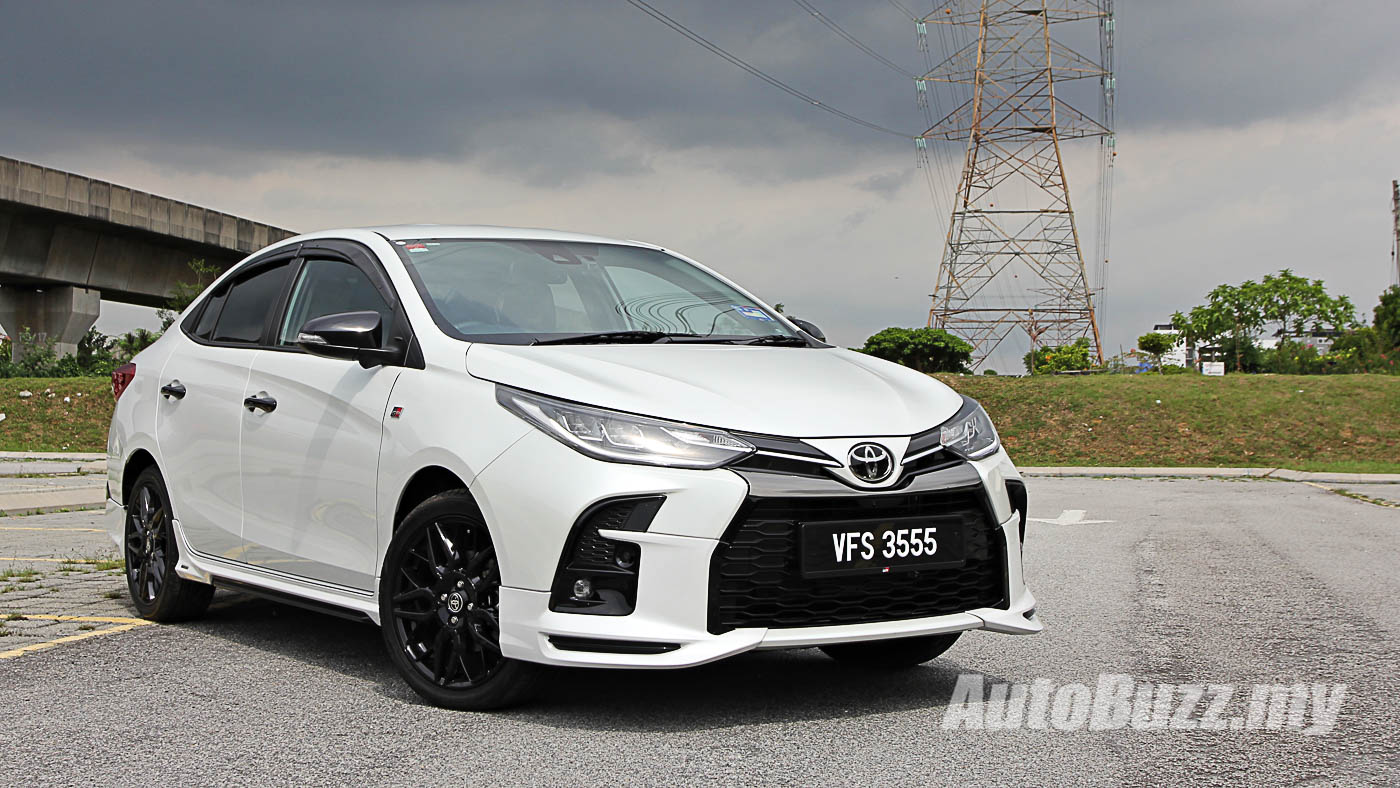 With the introduction of the Toyota Gazoo Racing Festival (TGRF) featuring the Vios Challenge one-make race, the communications for motorsports and performance-enhancement changed to Gazoo Racing or GR. As such, time was needed to slowly incorporate and build the GR brand image and awareness in Malaysia.

Thanks to three seasons of the Vios Challenge racing events at TGRF, the introduction of the Vios GR Sport is more than just a simple task of adding on a different body kit. Priced at RM95,284, the GR Sport is certainly much more than a RM7,700 accessories package fitted on to the 1.5G variant.

The scope of changes in the Toyota Vios GR Sport is much more compared to the previous generations under the TRD Sportivo nameplate. Dynamic performance now takes centre stage with large 17-inch gloss black wheels, stickier tyres, sports suspension plus a different tuning to the CVT to offer 10-steps (or speeds) on top of the exterior and interior visual changes.

First off, the Vios GR Sport is true eye-candy when viewed in the metal, especially when paired with the Platinum White Pearl paintwork. The larger 17-inch wheels with Toyo TR1 tyres in 205/45R17 size measures a larger diameter, filling the wheel arches even better.

Acceleration from standstill has suffered from the fitment of the larger and wider wheels. Yours truly found the Toyota Vios GR Sport nowhere near as quick as the Vios 1.5G with regular 16-inch wheels, especially picking up the pace from low speed (coming out of junctions and U-turns). Turning on the Sport mode helps a little, but this also means the engine rpms are held higher, which increases more unpleasant engine noises.

Driving around the multitude of repair work, patches, plus potholes in the streets of Petaling Jaya, the sports suspension offers a comfortable ride without any harshness. Great work from the local team in dialling in the valve setting and coil spring stiffness, which is said to be a 20% increase compared to the regular Vios model! Yes, the Toyota Vios GR Sport will look even better with a 15 mm reduction in vehicle height, but technical constraints mean the ride height has to follow the 1.5G model.

Bodyroll and composure of the vehicle are now a lot better, but that is expected from the sports suspension. It is however a pity that the steering ratio cannot be changed. Being a product designed in the early 2010s, the steering requires quite a lot of turning input to achieve the desired trajectory. Competitors that have been launched recently actually feel sharper, more natural in this respect.

What is amazing is the level of sound insulation this generation of Toyota Vios has. Even fitted with 205-section tyres featuring sports tread and pattern, the cabin remains quiet at all speeds.

Now for the biggest party piece that even UMW Toyota created a pair of badges for it- the 10-step CVT. In summary, the “gear ratio” or steps does provide a tonne of sportiness without breaking the speed limit. No charts or graphics were made, so yours truly tried to illustrate what the steps felt and looked like.

Leaving at full throttle in M-mode (manual) will not hold the engine rpm at its designed 6,200 rpm redline. The control unit in fact doesn’t even go near the tachometer’s red zone, automatically “shift up” to the next “gear” at close to 6,000 rpm. Each shift (at least to the seventh step/gear) is accompanied by a well-calibrated “shift shock” like a certain dual-clutch transmission from Wolfsburg, no matter if you leave it to shift on its own at full throttle or manually pulling the right paddle. Quite impressive to be honest, the whole system a lot more engaging than many other manual modes.

Each upshift sees the rpm drop between 700 to 1,000 rpm, based on observation. This means, shifting up at 5,000 rpm will see the rpm drop to about 4,250 rpm, while leaving it to self-shift/cycle the 10 steps at full throttle sees the rpm drop to circa 5,100 rpm. The short range of rpm drop allows the engine to be at its most optimum power band, according to UMW Toyota.

This single change in the Toyota Vios GR Sport might sound more performance-oriented, giving the driver impression of changing many gears like in a scene from Fast and Furious movies, but in reality, the pace feels slower. It does sound like an unnecessary exercise too, with the driver clicking the right paddle four times just to reach 90 km/h.

A trivia to end the sporty variant of the Toyota Vios in Malaysia. In the vehicle’s JPJ registration card or ‘geran’, the TRD Sportivo variants are named as ‘Vios 1.5S’, as the TRD Sportivo is an accessory package that is fitted on the 1.5S model code. Similar to this Vios GR Sport, it will just be labelled as Vios 1.5G as the entire accessory package is fitted to an existing 1.5G variant.