Kia has released a sketch of the upcoming fourth-generation Carnival, teasing the exterior design changes on the MPV. The all-new Kia Carnival – also known as the Sedona in some markets – is set to debut sometime in the third quarter of 2020.

From the single sketch image provided, the fourth-generation Kia MPV looks to feature a significantly more modern design when compared to the current Carnival – which was updated recently on our shores with the introduction of a 11-seater variant.

Up front, the slimmer headlights integrate neatly into brand’s iconic ‘Tiger Nose’ grille. The heartbeat-styled light signature also extends into the grille to form part of the frame – Kia designers call this ‘symphonic architecture’, blending design with technical features to “create a sense of harmony and structural energy.”

The line dividing the hood and the front grille wraps around the side, forming a single character line across the sides of the MPV connecting the headlights to the taillights. The fourth-gen Kia Carnival also seems to feature prominent front wheel arches for an aggressive stance.

Above the beltline, the upcoming Kia Carnival uses blacked-out pillars to create a wraparound greenhouse look, highlighting the floating roof. The stronger and more stylish appearance is designed to appeal to progressive young families, according to Kia.

Kia says that the design of the fourth-gen Carnival is heavily influenced SUVs – we can definitely see some resemblance to the all-new Sorento, and perhaps even a little bit of the Range Rover Evoque too. Acknowledging the inspiration, The Korean carmaker even gave it a new segment name for the model, dubbed ‘Grand Utility Vehicle’.

Currently, the third-generation of the MPV – sold as Kia Grand Carnival here – is available in a single 11-seater LX variant, priced at RM179,888. However, the older eight-seater KX and SX variants (depending on remaining stock availability) are available at up to 3.2% off, thanks to the sales tax exemption period. 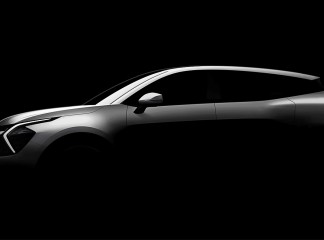