Home News This Lego Technic model is the only Lamborghini Sian you can actually... Remember the Lamborghini Sian? The Sian (bolognese for flash or lighting) is the Italian marque’s first hybrid supercar that was sold out even before the car was released, meaning there is absolutely no way of getting your hands on one, unless you were one of the few Lamborghini chosen ones.

What if we told you that that’s all about to change? Well, sort of anyway, because Lego and Lamborghini have just unveiled the Lego Technic Lamborghini Sian FKP 37, in a befitting supercar-esque launch event that was made entirely with Lego Technic parts. Seriously, check it out:

The latest Lego Technic bull is a 1:8 scale brick model, consisting of 3,696 pieces. We must say that it looks remarkably like the actual car, down to the identical (but scaled down) wheels, and the iconic Lamborghini Y-shaped motif on the headlights. Perhaps Lamborghini’s extravagant shapes and sharp edges work well with Lego blocks? Who knew.

Bearing the Technic name, the new Lamborghini Sian Lego set also includes working replica of the mid-mounted V12 engine, a pop-up spoiler, scissor doors, a full interior, and a “fully-functioning” eight-speed sequential gearbox that can be selected via paddle shifters behind the wheels.

Fully built, the model measures 60 cm long, 25 cm wide, and 13 cm tall. Lego promises over 14 hours of build time with the new Lego Lamborghini, and each unit will come with its own serial number to access exclusive build videocasts on the Lego website for a unique build experience.

Just like buying an actual Lamborghini, the Lego Technic set even comes with an overnight bag which you can place underneath the front hood, along with two coffee table booklets.

The Lego Technic Lamborghini Sian FKP 37 will cost RM1,599.90 when it goes on sale on the 1st of June at Lego Certified Stores and Legoland Malaysia, before making its way to third party retailers on August 1. Unlike the actual Lamborghini Sian, Lego isn’t putting a production cap on it – meaning that you’ll most probably be able to get one.

As an added bonus, all Malaysian purchases of the new Lego Technic Lamborghini Sian FKP 37 will also receive another minibuild Lego Lamborghini, and 10 lucky customers from June 1 to June 21 will also win exclusive Lamborghini merchandises. 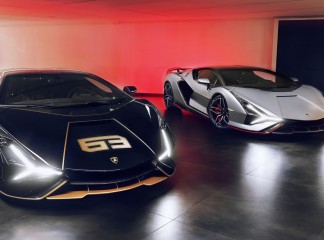