Home News This is the meanest the Kia Sorento has ever looked! 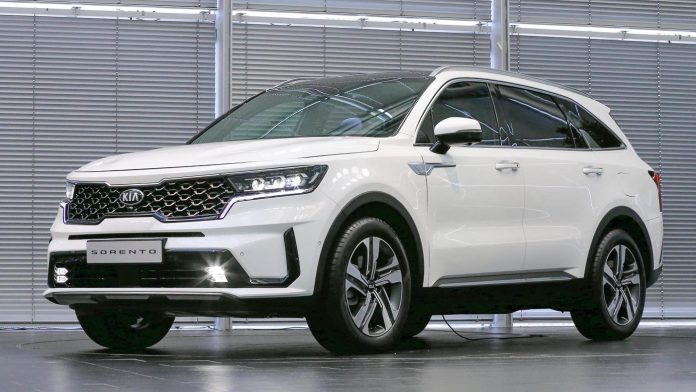 With such menacing looks, the 4th generation model which will be the first Sorento to feature a hybrid powertrain, should have more suitors than haters.

Like its predecessor, the Sorento will be built for Europe and many other markets at Kia’s Hwasung manufacturing facility in Korea. The car will also be built for North America at Kia’s West Point, Georgia, USA production plant.

The Sorento is the first vehicle to be based on Kia’s new-generation midsize SUV platform and it will be the first time that hybrid power has featured in the Sorento line-up.

The Sorento’s design revolves around the idea of ‘refined boldness’ – projecting a robust, tough-looking aesthetic while applying a greater degree of refinement and elegance, and even a sense of sportiness.

The front gets the latest version of Kia’s “tiger nose” grille, with the new “tiger eyeline” to depict “the intense impression of the lines around a tiger’s eyes.” Ok, Kia.

The new model, large as it may appear, is only 10mm wider than the third-generation Sorento. It is also 10mm longer and taller than its predecessor, yet it features shorter front and rear overhangs. The Sorento should be more spacious too, with a wheelbase that has grown 35mm.

Aided by the platform’s longer wheelbase, the second-row seats can now slide up to 45 mm further, creating a wider entry point to the third row with more space for the feet and legs.

The 35mm longer wheelbase also contributes to an overall improvement in cruising comfort while the new bodyshell with a 4% average increase in tensile strength throughout its structure also results in lower body vibrations.

Inspired by the Telluride, the Sorento adopts new vertical tail lamps which wrap around the side of the body. The fourth-generation model follows other recent Kia models, such as Telluride and ProCeed, with the Sorento model name displayed centrally across the tailgate.

Like the Velar, the Sorento’s integrated spoiler conceals the rear wiper to provide a cleaner, less obstructive rear view for the driver. For the first time, 20-inch wheels will be available, on top of the 17, 18, and 19-inch options.

Inside, twin digital displays on the dashboard take centre stage. The 12.3-inch digital driver instrument cluster is paired with a 10.25-inch touchscreen infotainment system with Apple CarPlay and Android Auto.

There are new haptic buttons for various controls and a 64-colour “Mood Lighting system” that emits soft ambient downlighting from beneath the dashboard and door trim. A wireless smartphone charger also sits at the base of the centre console, while a powerful 12-speaker BOSE surround-sound is also available.

Other cool stuff includes a head-up display and a new ‘Sound of Nature’ ambient sound function that enables occupants to select from a range of relaxing natural soundscapes.

The new Sorento Hybrid is powered by a 1.6-litre turbocharged Continuously Variable Valve Duration (CVVD) engine with 230 hp and 350 Nm, paired to a 6-speed automatic. The pair works alongside a 1.49kWh lithium-ion polymer battery pack under the floor and a 44.2kW electric motor.

As a result, the SUV offers generous space for up to seven passengers as well as one of the largest luggage capacities in its class – up to 821 litres (for 7-seater models) or 910 litres (for 5-seater models), depending on specification.In 7-seater models, with all seven seats in place, boot space is also increased by 32% compared to its predecessor, to 187 litres.

There will also be a 202 hp/440 Nm 2.2-litre turbo diesel engine, paired to a new 8-speed wet dual-clutch transmission.

The Lane Following Assist (LFA), controls acceleration, braking and steering depending on the vehicles in front. LFA operates between speeds of 0 and 180 kph, using camera and radar sensors to maintain a safe distance from the car in front, while monitoring road markings to keep the Sorento in the centre of its lane.

In addition, it is also the first Kia available with the new Remote Smart Parking Assist (RSPA) which enables drivers to move their car autonomously out of a front-and-back parking space remotely with their key fob. RSPA brakes the Sorento automatically if it detects another car, cyclist or pedestrian behind the vehicle or crossing behind it.

The Sorento’s Safe Exit Assist feature also prevents rear doors from opening if the vehicle detects a hazard approaching from behind, such as a cyclist or another vehicle.

Finally, Kia’s first Multi-Collision Brake system enables the Sorento to mitigate the severity of secondary collisions. It automatically applies vehicle brakes when the airbags have been deployed after an initial collision, further protecting occupants from secondary frontal or side impacts.