We’re all about the videos at AutoBuzz.my and in starting the year with a bang, nothing makes more noise than a drag race. Following the incredibly amusing pick-up truck drag race we produced a few weeks back, this time we have two really quick ones.

In one corner, you have the thunderous BMW M2 Competition with an intoxicating exhaust note and on the other, the new Toyota Supra which has so far received nothing but rave reviews from the local automotive media.

The rules were simple. Two runs along a 300 meter long straight, first to cross the finish line wins. Although, the winner might surprise you. 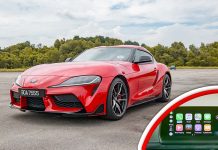 Toyota launched a GR Supra into the air and landed it on card boxes!