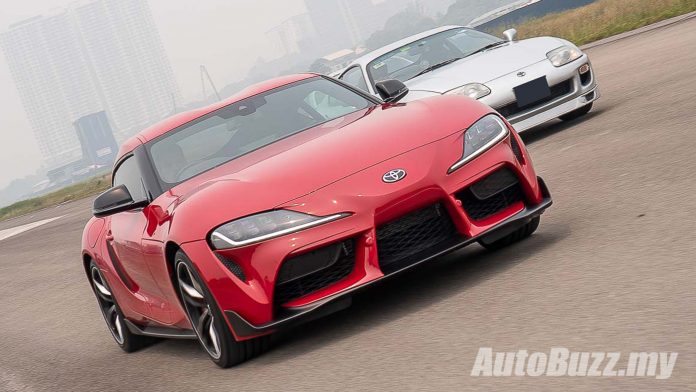 At long last, after years of teasing and anticipation, the all-new 5th generation A90 Toyota Supra is now in Malaysia – available only in a single variant, the GTS, priced at RM568,000 on-the-road without insurance.

And you’re getting a heck a lot for the money as UMW Toyota Motor had been like a kid at the candy store when specifying the vehicle.

The all-new Supra’s beautifully-sculpted body has been dressed with 19-inch light alloy wheels wrapped in Michelin Pilot Super Sport tyres measuring 255 width in the front and 275 width at the rear.

When specifying the brakes for the Supra, Toyota has opted for 4-pot calipers at the front and single pot units at the back. While it’s not stated on the calipers, these brakes are supplied by Brembo.

The Supra has also been specified with Adaptive Variable Suspension – an optional item in other markets – offering poise and precision to its handling characteristics. Also fitted in are adaptive LED headlamps, LED DRLs, LED fog lights and LED tail lights.

Toyota claims to have implemented their own touch in the tuning of the suspension, bushes, steering rack, differential, throttle mapping and even the sounds of the exhaust and based on what we’ve heard briefly, Toyota’s done a pretty darn good job at riling up the senses.

Under the Supra’s long front hood rests a 3.0-litre turbocharged straight-six engine making 340 hp and 500 Nm of torque. Power is sent to the rear wheels via an 8-speed ZF automatic transmission with paddle shifters, a launch control feature and an electronically-controlled limited-slip differential.

0 to 100 km/h is done in 4.3 seconds with top speed rated at 250 km/h and we believe them as we managed to clock 230 km/h almost effortlessly on an airstrip just before the launch. It will only be a matter of time before we hear tuners clocking or even surpassing the 300 km/h mark.

Inside, while it projects a largely familar “BMW setting”, the digital instrument cluster with a rev counter in the centre is Toyota’s very own. The Supra has also been equipped with dual zone air conditioning, a carbon fibre centre console, a 12-speaker JBL sound system and a head-up display.