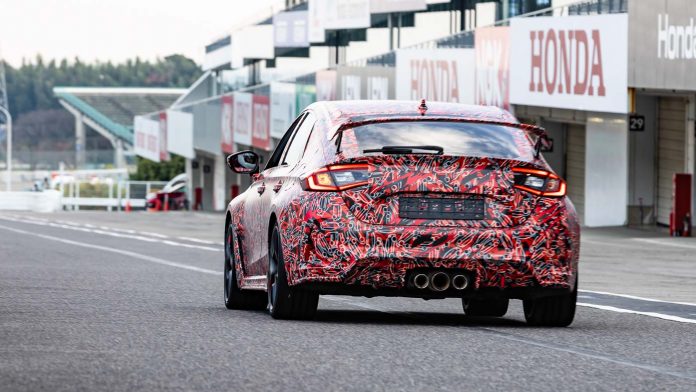 The upcoming Honda Civic Type R will be making its first public appearance next month at the 2022 Tokyo Auto Salon, giving eager Japanese fans a chance to catch a quick look at the highly-awaited hot hatch. However, this isn’t the Type R’s debut just yet – it’ll still be in prototype form, covered in the unique camo wrap that we first saw last week.

Still, that won’t be enough to hide all of the extra aerodynamic appendages that Honda has fitted onto the Civic Type R, including wider fenders, sporty bumpers, a large rear wing, and a rear diffuser – the latter even comes with the now-iconic triple exhaust exits down the middle.

With it still being a prototype, though, we won’t know for sure what kind of technical information Honda is willing to disclose at TAS 2022 itself. They did mention that it’ll be featured in an “action-packed test-driving video” so TAS attendees can go behind the scenes and catch a glimpse of the Type R’s development process, so there’s that, I guess…

For what it’s worth, we do know that Honda will be attempting to break the existing lap record at the Suzuka circuit set by the FK8 Honda Civic Type R Limited Edition. So as usual, it’ll be fair to say that the upcoming Type R will be the best one ever.

The upcoming Civic Type R is expected to still feature the proven 2.0-litre VTEC Turbo engine underneath its bonnet. Outputs are expected to remain roughly similar to its predecessor, in the region of 320 hp and 400 Nm, and will be paired to a six-speed manual transmission.

The all-new Type R will join its other Japanese rivals in showing off their latest and greatest at the TAS; Subaru will be unveiling a new STI concept race car, while Mitsubishi will be unveiling a Ralliart concept car. Nissan, meanwhile, will officially debut the new Z for the Japanese market, with a couple of special-edition models including a one-off in retro styling.

That’s if, the show isn’t cancelled due to the new Omicron variant that’s currently ravaging the entire world. Fingers crossed!