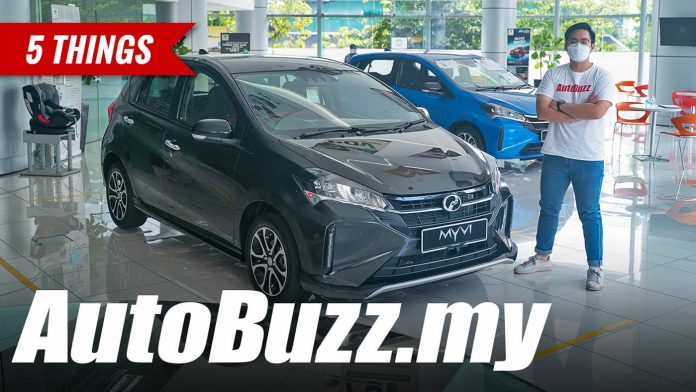 Malaysia’s most popular hatchback, the Perodua Myvi, has been given a facelift update last week, bringing with it a whole bunch of significant updates like revised styling, improved oily bits, and more advanced driver assistance features.

The new 2021 Perodua Myvi facelift is offered in four variants, starting from RM45,700 for the entry-level 1.3 G variant.

On the outside, the most obvious change is at the front, specifically the Myvi’s new front bumper with the ‘X’-shaped design motif, featuring strong diagonal lines and sharp leading edges. The upper grille has also been enlarged to complement the shape of the new bumper, while the headlights were slimmed down – particularly at the inner edge – and joined together by a chrome strip that runs across the bumper.

The two higher-end variants of the 2021 Perodua Myvi facelift also gets a pair of vertical daytime-running lights as standard – a first for Perodua on a factory-standard car.

While the engines underneath the bonnet remain unchanged – a 1.3 inline-four NA Dual VVT-i making 95 hp and 121 Nm, and a 1.5 litre four-banger making 103 hp and 137 Nm, Perodua has equipped the new 2021 Myvi facelift with the D-CVT gearbox from the Ativa, replacing the old 4AT box on all variants.

Inside there are also a whole raft of updates, including a new steering wheel, new analogue instrument cluster, a larger 6.9-inch touchscreen infotainment display (on the H and AV variants), and new seat upholstery options across the board.

But of course, the biggest upgrade on the new Perodua Myvi is its safety systems. Chiefly, ASA 3.0 is now available across the board (a RM2,000 option on the 1.3G variant), which offers improved autonomous emergency braking, front departure alert, pedal misoperation control, and lane departure prevention systems.

RELATED: Read more about the ASA 3.0 system that debuted with the Perodua Ativa here!

The range-topping AV variant takes it up a notch further with the addition of Level 2 autonomous driving features, such as adaptive cruise control, lane keep control, blind spot monitor, rear cross-traffic alert, and a reverse camera as a cherry on top.

For the full specifications breakdown of the new 2021 Perodua Myvi facelift, check out our launch coverage here.