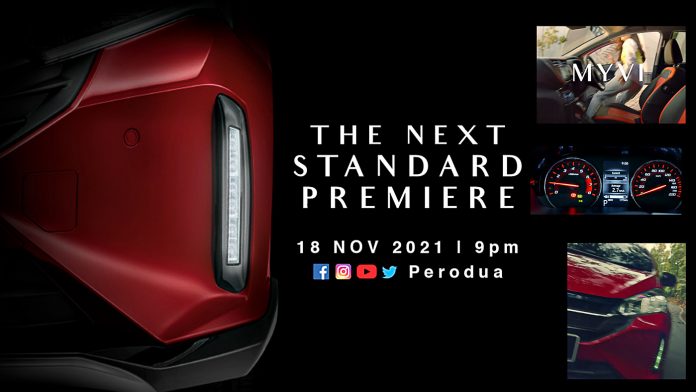 After a series of quick clips showing the front design and the instrument panel of the new Perodua Myvi facelift, the company has now shared the launch date- November 18th. A digital broadcast of the launch event has also been planned and viewers can tune into Perodua’s key social media pages which are Facebook and Youtube from 9:00 P.M.

As for the new details regarding Malaysia’s favourite car, the interior sees a liberal splash of red. Earlier images show the air-conditioning vents surround by red highlights, with another teaser image showing an all-new instrument cluster with sporty red graphics and mid-sized coloured display, which look very similar to the unit found in the all-new Daihatsu Xenia.

The latest short-reel video clip showed the black front seats sporting upholstery with plenty of red inserts, even more than the ones found in the Perodua Ativa AV.

As for the updates to the Myvi’s exterior, the front and rear bumpers now sport a cleaner design, removing the massive finned black resin inserts with much smaller strips. The front features a vertical light bar for the DRL function, while the ones on the rear are just styling items.

Perodua has also improved the technical performance of the Myvi, with signs pointing towards the fitment of the Dual-mode CVT (D-CVT) and ‘Power’ mode on the steering wheel that are also found on the Ativa compact SUV. Fuel efficiency has improved by 5% to 22.2 km/L.

Based on the number of key messages and placement of videos on Perodua’s website, it looks like the company has one last short clip (on safety) to share before the official launch on November 18th, focusing on the updated Perodua Smart Drive Assist (PDSA).

The new facelifted Perodua Myvi is now open for booking at all showrooms plus through their online portal. The new model sees a jump in retail pricing, now ranging from RM45,700 to RM58,800.