Even though it’s not officially launched yet, the Mitsubishi Outlander PHEV has already picked up a Good Design award in Japan.

The Good Design Awards is run by the Japanese Institute of Design Promotion, and has been running for over 60 years since its inception in 1957. It remains as the nation’s “sole official design evaluation and awards programme”, so winning it is certainly not an easy feat!

The Mitsubishi Outlander PHEV was awarded winner not just based on aesthetics, but also its ample space on the interior – particularly the availability of third-row seating – and an environmental friendly PHEV powertrain.

“The all-new Outlander has undergone a complete platform overhaul and has become a PHEV SUV with a large cabin space that can accommodate a third-row seating. The interior and body designs incorporate a horizontal tone for an enhanced feeling of strength and sharpness,” said one judge.

“Even while offering such a high degree of luxury, road performance, eco-friendliness, and cabin space, Mitsubishi Motors has maintained a reasonable price. SUVs continue to be popular, and we expect the Outlander to be selected by a wide range of users, including people with high environmental awareness.”

The Hyundai Elantra also won a Good Design award in Korea earlier this year! Check it out here.

The all-new Mitsubishi Outlander was unveiled in February this year, initially only with a newly developed 2.5-litre four-cylinder petrol engine. The PHEV variant is scheduled to launch in Japan by December this year, with a total driving range of over 700 km (70 km in pure EV mode) thanks to an improved electric motor and larger batteries.

As for looks, the all-new Mitsubishi Outlander is based on the product concept of “I-Fu-Do-Do“, which means authentic and majestic in Japanese. The new “Bold Stride” design concept on the exterior expresses a solid and commanding stance on the road, while the interior focuses on quality and touch-and-feel of the materials and colours. Gallery: Possibly the most “gaya” Mitsubishi Xpander in Malaysia 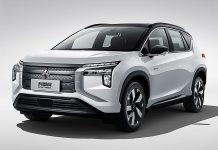