In case you didn’t know, Lynk & Co is now a major player in the World Touring Car Cup (WTCR), with three world championship titles (two constructors and one driver championship wins) already under its belts in the short two years time it’s been involved in the racing series – and things are already looking great in the 2021 season for the Chinese-Swedish carmaker.

To celebrate the achievement, Lynk & Co has unveiled a special Cyan Edition model for its 03+ sports sedan, inspired by the race car that’s brought them their incredible success in the WTCR series.

From the looks of it, the 03+ Cyan Edition is basically a production version of the 03 Cyan Concept which Lynk & Co used to smash two Nurburgring Nordschleife lap records with, including the same iconic cyan paint job.

Although the bodywork seems to have been pared down slightly, especially without the flared rear fenders, the 03+ Cyan Edition’s massive adjustable rear wing and carbon fibre bits still makes it look as though it came straight from a racetrack.

Completing its “because race car” looks are the unique Cyan Racing design wheels and Cyan Racing emblems littered throughout the entire exterior. It’s not just all show and no go either, as the Lynk & Co 03+ Cyan Edition also gets upgraded Akebono brakes, Michelin Pilot Sport 4S tyres, plus a set of adjustable Bilstein dampers on all corners.

It’s a similar story for the Cyan Edition’s performance, where the 2.0-litre turbocharged inline-four engine now makes 265 hp and 380 Nm of torque, matching the 05+ SUV. While not quite the 500+ hp output of the record-breaking Cyan Prototype, it’s still slightly more potent than the regular 03+, translating to 0.2 seconds quicker 0-100 km/h time of 5.7 seconds.

Lynk & Co’s first car dealership in Belgium looks nothing like a typical car showroom. Check it out here!

Unfortunately, the Lynk & Co 03+ Cyan Edition will be a China-market exclusive for now. No pricing information was announced either, but expect it to be quite a bit more expensive than the regular 03+ – the latter starts at CNY185,800 (Approx. RM120k) in mainland China. 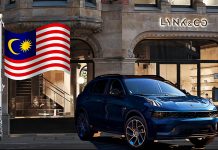