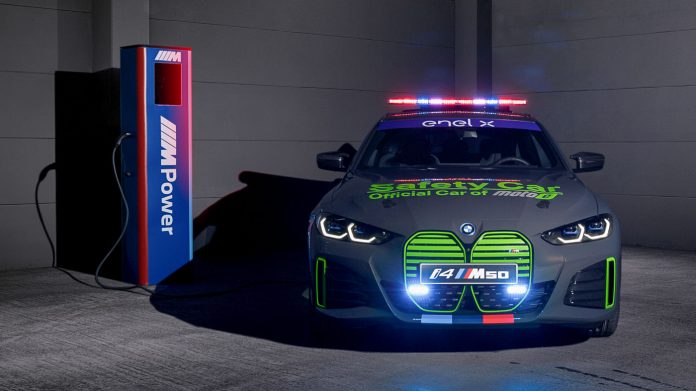 BMW has revealed the new BMW i4 M50 which will serve as the safety car in the FIM Enel MotoE World Cup, which happens this 15th of August at the Red Bull Ring. The i4 M50 replaces the BMW i8 used previously.

The new safety car will be launched in November 2021. Armed with an electric motor each to drive the front and rear wheels, there’s over 500 hp of electric power to stay ahead of the electric motorcycles.

To avoid things getting too sterile while the i4 M5 is on the move, BMW said its driving experience is heightened by a drive sound developed specifically for electric BMW M cars.

“With the BMW i4 M50, we are entering a new era and presenting our first M with a fully-electric drive train,” says BMW M CEO, Markus Flasch.

“With the first M BEV, we are showing that everything people have come to know about the M brand is also possible in a fully-electric vehicle. While the production version of the four-door Gran Coupé will arrive later, here’s an early preview.”

The FIM Enel MotoE™ World Cup has been part of the MotoGP World Championship since 2019.