Home AutoBuzz.TV Video: Sedan or hatchback? Here are 10 things to consider before buying! It wasn’t too long ago that car brands offered only a handful of models across its entire range. Now though, every marque seems to have a car for every segment, plus everything in between too (see: BMW). Making matters worse is the fact that some models are also now offered in multiple body styles, further complicating the already tough decision of buying a new car.

Sedans have their hatchbacks or wagon counterparts, and even SUVs nowadays come with coupe variants too. So to save you a bit of headache, specifically if you’re shopping between a sedan and hatchback, GC Mah brought along two cars and a friend (thanks, Vicky!) to help explore the differences between them, to hopefully help you make a more informed purchase.

The most obvious difference between a sedan and a hatchback is, of course, space. Cargo space in a sedan is almost always bigger than its hatchback counterpart, thanks to the dedicated boot in the traditional “three box” layout. In our example here, the Toyota Vios has almost double the cargo room offered in the Yaris (506 L vs 286 L)!

The trade-off for the bigger cargo space though, is versatility. Thanks to the bigger rear opening of a hatchback, it’s significantly easier to fit bulkier items at the back, especially when paired to the folding rear seats. If you’re someone who frequently visits IKEA for more than just their meatballs, a hatchback might be the way to go.

Thanks to the stretched roofline on a hatchback, rear passengers also usually get a larger headroom than their sedan counterparts. Although, you do have to put up with a slightly noisier cabin in a hatchback, due to the “openness” of the space itself.

Like how the Toyota Vios GR Sport in the video looks? Be sure to check out our full review here!

Additionally, rear passengers in a hatchback can also more easily access the cargo area, potentially making it a better road trip vehicle… as long as you don’t need to bring too much luggage along.

But of course, there are many more things to consider when buying a car than just space, so be sure to watch the full video above. Given the choice though, would you prefer a sedan or a hatchback as your daily driver? Let us know why in the comments section below! 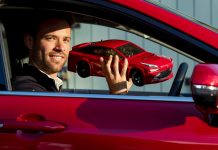