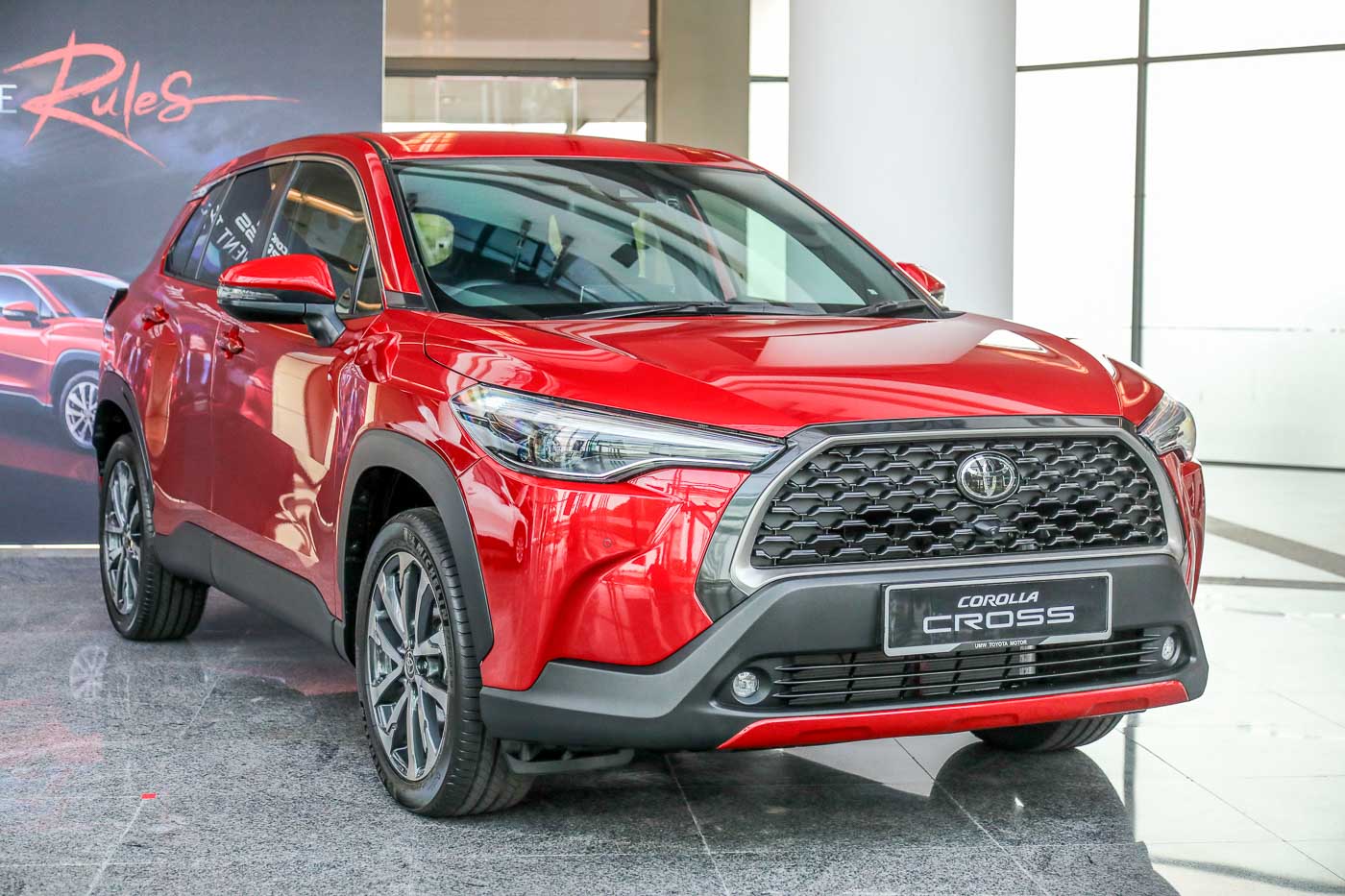 One of the most anticipated Toyota models has finally arrived in Malaysia- the Toyota Corolla Cross. First debuted in Thailand close to 10 months ago, with ASEAN neighbours introducing within the year 2020, UMW Toyota Motor (UMWT) is offering the fully imported (CBU) Corolla Cross with just the conventional 1.8-litre petrol engine, with the 1.8G priced from RM124,000, with sales tax exemption until June 30th and the 1.8V priced from RM134,000, without sales tax exemption.

The introduction of the Toyota Corolla Cross also means the discontinuation of the polarising Toyota C-HR that also shares the same powertrain but priced much higher with a lower amount of valued features.

There were hopes that UMWT will be offering the hybrid variant into the Malaysian market, as Toyota in Indonesia, Vietnam and of course Thailand all offered the 122 hp 1.8-litre hybrid variant as the range-topper. The current market landscape in Malaysia perhaps suggests that only the 1.8-litre petrol variant is a viable investment for all parties involved.

The 2ZR-FE 1.8-litre engine and CVT-type transmission are taken directly from the Corolla sedan. The chassis and the fundamental engineering of the Corolla Cross is based on the TNGA platform GA-C but with a change to the rear suspension system.

The independent double-wishbone multi-link rear axle has been replaced with a newly developed torsion beam axle that promises great body control and stability while cornering yet high comfort levels while cruising. We really like how the new Toyota Corolla Cross drives and you can read a very brief review here!

The form of the Toyota Corolla takes some design cues from the larger RAV4 sibling, such as the satin-finished piece of trim with the model name on the rear pillar. Lighting technology is used to separate the two variants. In the V-variant, LED lighting is used for the headlamp, DRLs as well as the taillamp with a ‘curtain’ pattern.

The G-variant gets halogen front lighting with a simpler LED taillamp design with both variants featuring LED front and rear fog lamps.

Larger 18-inch rims with wider 225-section tyres are also fitted on the V-variant, while the G-variant identifies itself easily with single-tone silver rims in 17-inch diameter. Both sizes nonetheless come with a tyre pressure warning system (TPWS).

Being designed as an SUV, the ground clearance of the Toyota Corolla Cross is 161 mm, with a generous approach angle of 18 degrees.

Standard items across both variants include a powered tailgate with hands-free foot-activated sensor, smart entry system, auto-folding side mirrors with reverse-link and blind-spot monitor plus rear cross-traffic alert (RCTA) feature. UMWT is also fitting the premium security and solar window film as standard on both variants, together with a front-facing driving video recorder (DVR).

The cabin is where everything returns to familiarity. The dashboard is lifted directly from the Toyota Corolla sedan and standard equipment plus fittings in both variants include:

Allow the powered tailgate to open itself, through a hands-free foot sensor, and a large 440-litre luggage area is revealed. Two road bicycles can be accommodated with the rear seats folded down, the luggage floor flat and level.

The 1.8V just adds ambient lighting to the front doors, front cupholders and centre tray together with an acoustic-glass front windshield.

Oddly, the electronic parking brake has been replaced to something not seen in a new Toyota for some time- a foot-operated parking brake that engages the rear disc brakes. Another omission, when compared to the Toyota Corolla sedan, is the powertrain’s Sport mode which is not in the Corolla Cross.

Similar to the Corolla sedan, the Toyota Safety Sense (TSS) safety suite, consisting of the five main systems, is only available in the 1.8V:

The Dynamic Radar Cruise Control (DRCC) is only able to operate from 30 km/h due to the parking brake that is mechanical rather than electronic, where it is unable to engage when the vehicle is stationary.

Additionally, a standard-fitted Vehicle Telematics System (VTS) can track the vehicle’s position using GSM/GPS signals. The owner can also monitor the vehicle’s status and if the unfortunate event of the Toyota Corolla Cross is stolen, a Command Centre will locate and inform relevant authorities to recover the vehicle.

In the event of an impact being detected, the centre will inform emergency services to provide assistance at the vehicle’s location. Owners of Toyota Corolla Cross will enjoy a free subscription to the VTS service for three years.

UMWT also said that the Corolla Cross 1.8G is available for viewing, test drives and purchase, while the 1.8V will only be available at a later date, but bookings are now accepted at all physical as well as virtual showrooms.

With such attractive pricing, the Toyota Corolla Cross could just steal quite a significant amount of market share from Honda before the arrival of the all-new HR-V.