Yup, that’s it. The story is pretty much all in the title. Mini has announced that it is currently working on an all-electric John Cooper Works model, but stopped short of providing any other information, aside from a couple of photos.

From the looks of it, the all-electric Mini JCW – in prototype form at least – is based on the limited-run Mini JCW GP model, complete with the crazy fender flares and huge wings. The only visual difference we can see is the new blocked-off grille as per electric car tradition, as well as the deletion of the tailpipes.

Mini’s press release says that it will be built on a new architecture that promises to deliver the “extreme performance and genuine driving enjoyment” as expected in a JCW. Seeing that it’s based on the GP, we’re guessing it will be an all-out performance model as well, and not just a souped-up Mini with a couple of extra ponies under the hood. Which brings us to the biggest question mark in this whole ordeal – just which electric powertrain was Mini going to use?

There aren’t that many in their own EV arsenal; the only all-electric model they currently make is the Mini Cooper SE, which makes “only” 184 hp and 270 Nm of torque – a long way to go to match the MINI JCW GP, also known as the most powerful Mini ever made. Although credit where it’s due, the Cooper SE has already been used – basically stock – in a rally stage.

The most obvious answer we can think of right now is BMW’s fifth-generation eDrive platform, which will be used in the upcoming BMW iX3 and iX. The single-motor powertrain in the iX3 is said to make 286 hp and 400 Nm of torque, which is just a little shy of the Mini JCW GP. The dual-motor iX meanwhile is said to make “at least 500 hp”, but really, it’s anyone guess at this point if either of these will make it into the all-electric JCW.

What we also don’t know is the release date of the new all-electric JCW, as Mini makes no mention of it at all in the press release. However, we’re hoping that it won’t be too long of a wait, seeing that it’s already undergoing testing at the Nürburgring Nordschleife based on the photos provided. 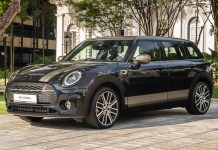