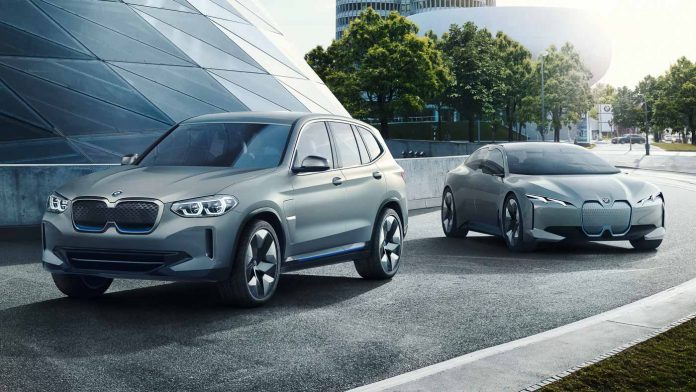 BMW is introducing its fifth-generation BMW eDrive technology in the BMW iX3, the brand’s first all-electric SUV, due in 2020. The same electric powertrain technology will also be used in the i4, as well as the iNEXT technology flagship.

The new electric powertrain is developed completely in-house by BMW, and the motor and high-voltage batteries produced in corporately owned manufacturing plants. Both components are flexibly scalable in terms of power and energy content, and thus able to be used in various different vehicle concepts and segments.

The fifth-generation BMW eDrive powertrain incorporates the electric motor, system electronics and transmission into a central housing. This has considerably lowered the installation space and weight of the drive technology; BMW says that ratio between motor output and weight of the drive system has improved by around 30% compared to the previous generation.

The electric motor in the BMW iX3 generates a maximum power output of 210 kW (286 hp), with a maximum torque at 400 Nm. As with any electric motors, maximum torque is available instantly from standstill, but BMW claims that their exclusive design measures enables the motor to keep up even at the upper motor speeds.

BMW’s new construction methods for the electric motor has eliminated the need of rare earth materials. With the motors driving the iX3’s rear wheels, the efficiency of the motors can be increased, while also conveying the traditional BMW rear-wheel drive experience in a new domain.

As for the battery, the high-voltage unit in the fifth generation eDrive system is based on the latest evolution in NMC-811 technology. BMW’s development on the battery has allowed for an increased energy density, while also improving all battery cell characteristics, in particular the durability and safety of the high-voltage cells.

The battery pack in the iX3 is installed in an “extremely flat position” in the vehicle floor, thanks to the scalability of the cell design to optimise the compact packaging of the pack.

As a result, the electrically powered iX3 does not compromise in terms of space in the passenger cell and luggage compartment, compared to the petrol or diesel powered versions of the BMW X3.

The BMW iX3 utilises a 74 kWh battery pack, achieving a range of more than 440 km in the WLTP cycle – translated to a power efficiency of less than 20 kWh/100km.

Once the battery pack completes its first life in the car, it can be repurposed as a stationary battery pack, further improving the overall CO2 balance of the BMW iX3.

In related news, BMW has delivered half a million electrified vehicles to customers worldwide, with the delivery of a BMW 330e at the BMW Welt in Munich yesterday.

BMW aims to double that number by the end of 2021 with the introduction of new electric models such as the iX3, and i4 in 2021.