If no one told you it was a facelift model, you would’ve thought it was an all-new Jaguar XE.

Launched globally in 2015 and subsequently introduced in Malaysia in 2016, the facelift Jaguar which was launched in August here in Malaysia brings about a few subtle changes both on the exterior and interior but with a maximum effect. Put them side by side and it’s clear how much more dated the pre-facelift model looks.

Beginning with the exterior, the size and shape of Jaguar’s signature gaping grille has been downsized and redesigned. It gets slimmer headlamps and different headlamp fixtures along with sportier front and rear bumpers. Even the exhaust tips have been redesigned to accentuate the new rear bumper.

Inside, the changes are even more significant. For starters, you get a new touch-sensitive steering wheel first seen on the I-Pace, a new fully-digital instrument cluster and new infotainment display similar to the Velar, and digital air-con controls.

As for the drive controls, the sleek pop-up rotary dial has been replaced with a conventional gear lever seen in the Discovery Sport we reviewed recently.

The facelift Jaguar XE is priced at RM395,831.02 and is inclusive of the sales tax exemptions. 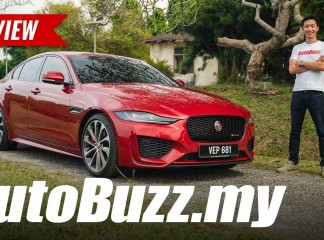