Home News Someone tell Hyundai they accidentally released the Tucson concept as the actual... Hyundai has officially unveiled the all-new 2020 Tucson SUV today, and it looks like nothing we’ve seen before. Remember the Vision T concept Hyundai shown-off at the 2019 LA Auto Show? Well, it seems like the Korean carmaker has taken the otherworldly design concept and put it straight into production.

The exterior of the all-new Tucson carries what Hyundai designers call the “Parametric Dynamic” concept, which uses lines, faces, and angles to create a “kinetic jewel” surface. Evident right at the face, the daytime-running lights are integrated right into the triangular jewel-like grille design, making it invisible when turned off.

The exaggerated parametric character lines on the side, first seen on the Elantra, is also present here, with the shoulder line stretching all the way from the front squared-off wheel arch, connecting to the full-width taillights.

Echoing the design of the front lights, the 2020 Hyundai Tucson’s new taillights also contain half-hidden triangular shapes that are only visible when lit. The rear wiper blade is also tucked neatly underneath the rear spoiler when not in use, maintaining the clean futuristic shape of the SUV. The jewel-like design is also mirrored on the rear bumper pattern.

The cabin is just as futuristic as its exterior, thought a whole lot more minimalistic. The entire dashboard is split into two halves, with an unbroken line enveloping the two front passengers starting from the doors, much like the Ferrari Roma.

The infotainment display is now integrated directly into the centre console – 10.25-inch for the range-topping variant while the lower-end models get an eight-inch display. Sticking to the whole minimalist/futuristic theme, the climate control panel underneath it is also void of any physical controls, with everything relegated to touch panels.

The instrument gauge cluster is also fully digitalised with no hood covering the top – much like the newer Mercedes-Benz models – to blend in better with the overall minimalist look of the cabin.

Three powertrain options are available on the 2020 Hyundai Tucson at launch, including petrol, hybrid, and plug-in hybrid options. The internal-combustion petrol model is powered by the 2.5-liter SmartStream four-cylinder mill, which is good for 190 hp and 247 Nm of torque.

The electrified models rely on a 1.6-litre turbocharged four-pot engine to make a combined system output of 230 hp. The engine itself produces 265 Nm of torque, while the electric drivetrain tacks on another 350 Nm. Although combined system output will definitely be lower than the sum of the two, it should still be plenty enough for some fun.

The internal-combustion model gets an eight-speed automatic as standard, but hybrid variants are paired to a continuously-variable transmission. Hyundai’s HTRAC all-wheel-drive system is also present here on the all-new Tucson, with new additional driving modes to drive through mud, sand, and snow, in addition to the usual Eco, Comfort, Smart, and Sport modes.

Available in both a long- and short-wheelbase version, though both five seaters, the 2020 Hyundai Tucson will go on sale in Korea this month, while the U.S. and other markets will be getting it starting from the first half of 2021. A slightly more performance-oriented N-Line version will also be making its appearance sometime in the future. 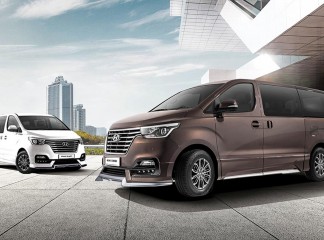