Home News Rolls-Royce raises the bar for custom work with an illuminated dashboard! The Bespoke Collective division of Rolls-Royce has upped their customisation game yet again with a new creation called the Illuminated Fascia.

According to Rolls-Royce, busy and superficial detailing was rejected in favour of a more refined method to project the company’s customising expertise hence, a screen was to achieve this effect simply wasn’t good enough. In other words, if it’s not complex, it’s not worth Rolls-Royce’s time.

The illumination is achieved through 152 LEDs mounted above and beneath the surface of the dashboard. They’ve also been meticulously colour-matched with the cabin’s clock and the lighting of the instrument cluster.

To ensure that the “Ghost” graphic is evenly illuminated, a light guide is used, featuring more than 90,000 laser-etched dots across the surface. This not only projects light more evenly but also creates a twinkling effect. When the car is not in operation, the Illuminated Fascia becomes completely invisible.

To achieve this, three layers of composite materials were used. The first is a Piano Black substrate, which is laser-etched to remove the black colouring and allow light to shine through the Ghost wordmark and star cluster. 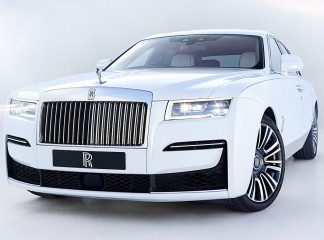