Since Proton formed its new partnership with Geely, the national carmaker is on overdrive to revitalise and reinstate confidence among consumer. Since then Proton has launched their first ever SUV and introduced three model updates with more to come before the end of 2019.

The Proton X70, the first car to be launched under the new Proton-Geely partnership, proved to be well received among Malaysians with 15,175 units delivered to customers in the first six months of 2019. This parks the X70 the cumulative sales leader for the overall SUV segment as well as the best-selling premium and executive SUV.

The strong sales figures for the X70 was not the only contributor to Proton’s overall sales growth of 61% for the 1H of 2019. Their core PIES models – Persona, Iriz, Exora and Saga – also performed equally well, contributing to more than half of overall sales.

Proton estimates that the company now commands 14.7% market share year-to-date and are on track to achieve its sales target for the year.

CEO of Proton, Dr Li Chun Rong said: “By achieving a market share of 18.1% in June, PROTON continues to show positive sales growth this year despite the tough market conditions following the Hari Raya holidays. Our year to date market share currently stands at 14.7% and is a big improvement of our 2018 figure of 10.8%. For the second half of the year, we will concentrate on continuing to build our sales and exciting the market further by introducing new and updated models as was promised at the beginning of the year.”

Proton launches its own website for certified pre-owned cars! 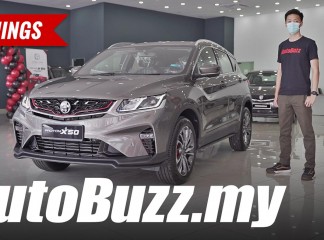 Here are 3 things we liked about the new Mitsubishi Xpander...