Home News No matter how you look at the BMW 7-series, that grille is... Traditionally, the grille has always been the identity of a car and for BMWs, those kidney grilles are the symbol of the brand; like what the Petronas Twin Towers are to Malaysia.

When the all-new 7-series was first unveiled to the world in January this year, the automotive end of the Internet exploded but for the wrong reasons. Regardless of how quick and well-equipped the car was, no one could lay their focus away from that unnecessarily massive front grille.

Three months on, BMW has released this set of new pictures of the 740LE taken in Faro, Portugal and it still looks like a jarring imperfection – as if it has a swollen eye.

GC Mah was sent on the same trip – an international media test drive – where he also got a closer look at the BMW X7 alongside the 7-series so keep your eyes peeled for that video. He actually thought the grille looked good on the car although we suspect that jet-lag may have impaired his judgment.

At least, you don’t get to see the struts beneath the grille, like in the BMW X3 xDrive 30i we reviewed recently.

There will be no questioning its performance though. Among the top ranking 7-series’, the V12 M760Li xDrive makes over 580 hp while a twin-turbocharged V8 unit pumps out 500 hp. 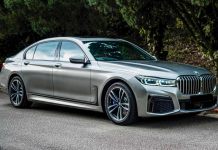