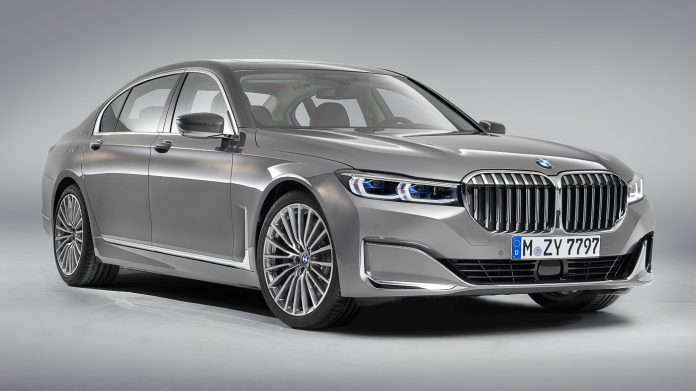 Crazy isn’t it? That’s even before you find out that with the optional M Driver’s Package, its electronically-limited top speed of 250km/h will be de-restricted to over 305 km/h.

The source of this madness comes from a 6.6-litre twin turbocharged V12 with 585 hp and 850 Nm, to power all four wheels through the xDrive system.

With this introduction, the new 7-series will also be available in 750i xDrive form, powered by a twin turbo 4.4-litre V8 engine making over 500 hp, more than 80 hp from before, with an insane 750 Nm (100 Nm increase) on demand. 0 to 100 km/h is done in just four seconds with the long wheelbase model being just 0.1 second slower.

The BMW 7 Series will be offered with a long wheelbase variant that’s 14 cm longer than the standard car but by far the biggest and most noticeable change in the exterior is the new kidney grille that’s 40% larger, framed by a single piece surround.

The new grille comes with active air flaps with adjustable vanes which open only when cooling is needed. At the back, the three-dimensional rear lights of the new 7 Series is now more than 3 cm slimmer, complemented by a slim light strip measuring just 6 mm, that creates a discreet illumination when the daytime running lights are switched on.

The cabin of the new 7 Series has also been significantly refined with optimised shielding of the rear wheel arches to reduce tyre noise even more. Further noise reduction in the interior had been achieved through increased sound insulation in the B-pillar,  seatbelt outlet covers and the rear seat backrest.

Laminated glass with an increased thickness of 5.1 mm is now used not only for the windscreen but also for the side windows and rear window too. This new construction for the side and rear windows is standard only for the BMW 750i xDrive, BMW 750Li xDrive and BMW M760Li xDrive models but will be available for the other models as part of the Rear Comfort Glass option.

The electric power windows now come with new drive motors and control units which ensure precise power management, smooth movement and a consistent sound when the windows are lowered and raised. Also part of the new system is the improved fluency of the transition stages at the beginning and end of window opening and closing.

So while we await the new BMW 7 Series’ arrival in Malaysia, here are some pictures for you to digest that new grille.