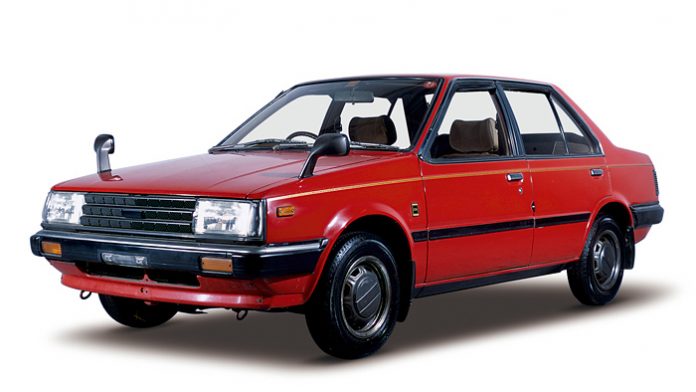 In this edition of Throwback Thursday, we’re revisiting the 1980s once again; where an economical vehicle made famous by its signature bumpers is put in the spotlight – the evergreen Nissan Sunny.

Nissan’s compact sedan lineage is as extensive as the characters of X-Men so we’ve narrowed our focus on the fifth-generation model (1981-1985), codenamed B11 but more commonly known as the 130Y.

Introduced in late 1981, the 130Y was the first of the Sunny models to embrace a front-wheel drive configuration; to lower production costs. Its “three-box design” was simple and clean, along with the option for an estate version.

Back at home, Edaran Tan Chong Motor (ETCM) introduced the Sunny to Malaysians in 1983. According to our friends at Motor Trader Malaysia, two engines were offered for the Sunny; a 1.2-litre petrol engine and 1.7-litre diesel unit. ETCM kept the Sunny affordable with its price ranging from RM19,800 to RM21,850. As such the Sunny was an instant hit among Malaysians, until a certain national car showed up.

Still, the Sunny did relatively well for a non-national car in Malaysia as it epitomised a “start and go” vehicle. Its simple and reliable engine meant a no frills ownership experience with low maintenance cost but its biggest trump card were the signature bumpers.

Do not let the hard plastic surface fool you. Inside, it housed two shock absorbers which were tasked to cushion the impact of a collision which adhered to the safety standards of the United States back then. ETCM even cheekily had an “Awas Absorber Bumpers” sticker at the rear bumpers as a reminder to not kiss the Sunny’s back.

The Sunny’s unpretentious characteristic resonated with buyers during its 13-year run. In fact, the model exceeded its supposed shelf life even when newer generations of the Sunny were introduced. In 1996, ETCM decided to rest the Sunny’s nameplate and the name never resurfaced again. That’s until its true successor, the Almera, took over the mantle in 2011.

A quick search on Mudah.my showed that a used Nissan Sunny can be had within the price range of a flagship smartphone. But of course, extra cash would undoubtedly be needed for touch ups, wear and tear replacements.