When the Hyundai Ioniq was first previewed in Malaysia early this year at the 2016 My Auto Fest, Hyundai Sime Darby Malaysia (HSDM) revealed that is a challenging product to introduce unless the Ioniq is locally assembled. Should HSDM manage to locally assemble the Ioniq, the pricing of the vehicle will be extremely attractive, much like the BMW 330e and Mercedes-Benz C 350e.

Thanks to favourable market response, HSDM confirmed – at the second preview of the Ioniq – that they will be introducing the Ioniq Hybrid here in Malaysia in CKD form. Initially said to be priced around RM130k, the Ioniq surprised everyone with a base sticker price of RM103k, which includes insurance.

As with all Hybrid vehicles, the Ioniq was designed with aerodynamics as priority to reduce drag coefficient, ultimately contributing to fuel savings. Thanks to its hatchback body style with coupé like silhouette, the Ioniq boasts a drag coefficient of just 0.24.

At the front of the HEV Plus, you get Hyundai’s familiar hexagonal chrome grille with active air flap that opens and shuts to optimise cooling and fuel efficiency, a subtle blue accent on the front lip, bi-xenon headlamps with LED daytime running lights, LED positioning lamps, powered folding wing mirrors and keyless entry. Moving to the rear, you will be greeted with a pair of C-shaped LED combination tail lamps, duck lip spoiler, black accents on the tailgate and rear bumper.

Both variants ride on dual-tone 17-inch alloys wrapped in 225/45 profile Michelin Primacy 3 tyres, but the HEV will come with 15-inch wheels at a later date.

Stepping into the cabin of the Ioniq, immediately you will notice the blue accent linings from the push start button to the floor mats, highlighting the eco-friendly characteristics of the car. Standard equipment on both variants include a multifunctional steering wheel (leather wrapped on the HEV Plus, urethane on the HEV), dual-zone automatic climate control, foot parking brake, push start and reverse camera.

Moving down the range, HEV gets manual fabric seats, a 4.2-inch TFT LCD instrument cluster and a 5-inch touchscreen infotainment system. It also loses out on the ECM for a regular rear view mirror.

Boot space in the Ioniq is rated at 443 litres but for added space, the rear seats can be folded down with 60:40 split that expands the boot space to 750 litres.

Powering the Ioniq is a combination of a 1.6-litre naturally aspirated four-cylinder Kappa Gasoline Direct Injection (GDI) that produces 104 hp and 147 Nm of torque, together with an electric motor that generates 43 hp and 170 Nm. Combined output of the BlueDrive Hybrid system is rated at 140 hp and 265 Nm of torque. Drive is sent exclusively to the front wheels via a six-speed dual clutch transmission (DCT).

Thanks to the smaller wheel diameter on the entry level variant, fuel consumption is rated at 3.4 litre per 100km. The HEV Plus variant is slightly less frugal at 4.0 litres per 100km. However, the better equipped Ioniq will do a 10.8 seconds century sprint while the lower spec gets there in 11.1 seconds. Top speed is registered at 180km/h on both variants.

The Ioniq is also capable of travelling in pure electric mode with zero emissions for speeds of up to 120km/h. For added driving dynamics, drivers are able to select different driving modes such as Eco, Normal and Sport.

However, the top of the line HEV Plus gets a massive step up in terms of safety features, comparable even to cars three times its asking price. The top spec Ioniq features Smart Cruise Control (SCC) that allows the driver to keep a constant distance with the vehicle ahead. Autonomous Emergency Braking System warns the driver of an imminent collision as well as applying full braking force before a collision, and this is operable at speeds of 10km/h and above. Other features include Lane Keeping Assist System(LKAS), Lane Departure Warning System and Blind Spot Detection.

There are seven exterior colours for the Ioniq: Phantom Black, Aurora Silver, Polar White, Marina Blue, Platinum Silver and Iron Grey, whereas Phoenix Orange is only exclusive to the HEV Plus. As with all Hyundai cars, the Ioniq comes with a 5-Year or 300,000km (whichever comes first) extended warranty programme.

The Hyundai Ioniq is locally assembled at the company’s plant in Kulim, giving it the much deserved EEV tax breaks. Considering the features and asking price of the Ioniq, it certainly is a very attractive package for city dwellers looking to leave a greener footprint. 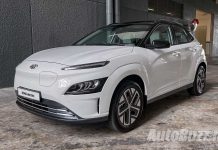