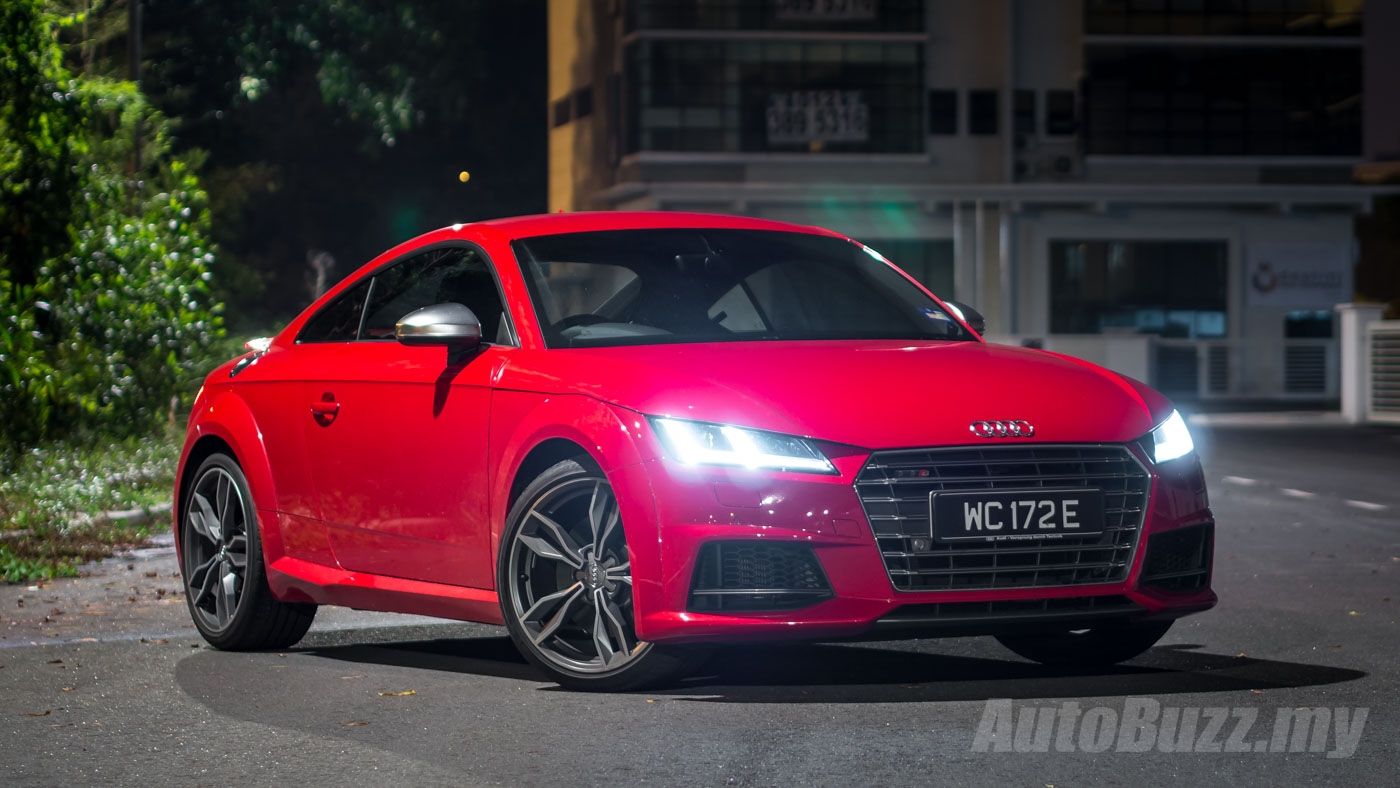 Let it be known that the Audi TTS is basically a Golf R in a fancier suit. It’s not quite as tail-happy as its closest rivals, nor impressive by the sheer numbers its 2.0-litre engine produces. But we’re here to tell you that these all don’t matter. We’re here to set a few things straight and hopefully by the end of this review, you’ll have a couple more reasons to put your money down (or not) on Ingolstadt’s meanest breed of TT on sale here in Malaysia.

Some of us are familiar with the TTS. The second generation model proved to be popular here, but it didn’t manage to swoon driving enthusiasts over quite as convincingly as say, a straight-six BMW 135i, never mind a Lotus. It couldn’t make the cut, and it’s for that very reason why people who bought them hardly ever bring the TTS to its limits. Its sporty credentials mellowed into a mere symbol of status, but the Audi TTS you see here aims to prove how well it can walk its talk, and how well it can take a beating.

As with all Audi S models, the TTS comes with satin aluminium side mirrors. The front end is dressed with a more aggressive bumper, chromed hexagonal grille and full LED headlights as standard. You can opt for the Matrix LED headlights for an additional sum if you fancy, but we think this does the job well enough.

The wheels are larger at 19-inches, and the rear is finished off with a sportier bumper with integrated diffuser. Thankfully, both exhausts are not visually faked, unlike a few rivalling brands. In typical TT fashion, the spoiler is automatically raised at 120km/h, but can be manually raised through a switch located just below the central air vents. Overall, the TTS is about 50kg lighter than the previous model, thanks to more liberal use of aluminium.

Here, things aren’t profoundly different from the regular TT. They may look identical, but the TTS comes with Alcantara-leather seats, and both front seats are electronically adjustable. Another difference is the that seats now come with pneumatically adjustable side bolsters that can inflate or deflate to fit drivers of varying sizes.

The wholly digital 12.3-inch Audi Virtual Cockpit setup is standard offering, and this time we get to sample the MMI Navigation which is by far the best in-car navigational mapping system, period. If it gets too distracting, simply press on the ‘View’ button on the steering wheel and you’ll have your route guidance shifted (very smoothly too, I might add) to the left of the screen.

There’s a 12-speaker Bang & Olufsen premium sound system which offer exceptional clarity and thumping bass, something many can really appreciate on a casual, slow drive (yeah, slow, right). Other additions include more TTS embellishments on the bottom of the steering wheel and head restraints, as well as a quattro badge to the left of the dashboard.

Underpinning this TTS is Volkswagen’s MQB chassis, which means it’s inherently talented and well balanced to begin with. The four-cylinder engine displaces 1,984cc and is given a bigger turbocharger to ram more air into the engine. The engine is mounted transversely and produces 286 horsepower and 380 Nm of torque. Drive is sent to all four wheels (quattro comes as standard) through a close ratio six-speed wet dual clutch transmission.

Unfortunately for us, we won’t be getting the 310 hp variant offered in other markets, so this version of the TTS is the one and only choice available in Malaysia. Besides losing out one-tenth of a second in the century sprint (the 310 hp dusts that in 4.6 seconds, versus our TTS’ 4.7 seconds), everything else is as standard as the TTS gets. Thrown into the package here is a synthesiser that manufactures engine noise and feeds it into the cabin. It’s a tad more muted compared to the same feature found in the Golf R, but welcoming nonetheless.

Armed with three-quarters to a full tank of RON 97, I thought best to test the boundaries of the TTS’ limits on a trip up the highlands. It was an hour before midnight on a weekday, and with that constraint I unhesitatingly began driving through the zippy roads of Ulu Yam.

On just about any road condition, ride quality was terribly harsh, partly due to thin tyres, partly because of how the suspension was tuned. It doesn’t matter what driving mode you choose, for the TTS is rigid 24/7. The upside to this is an urgent sense of the foot; the coupe decimates every corner unperturbed, so precise as it is quick on the turn in.

The dynamic ceiling of the TTS is far higher than the TT we sampled before, and it’s all thanks to an Italian word – quattro. The Haldex all-wheel drive system doesn’t work full-time, which means the bulk of the power is sent to the front wheels on any given occasion. The only time the rear wheels slip into action is when the car’s computers deem it necessary, and the amount of torque each wheel receives is infinitely variable. In short, you can gun the TTS into a corner, apply a dollop of throttle and still exit the corner without the slightest hint of understeer. It’s got you covered that way, we promise.

It may have just 286 hp and 380 Nm on paper, but Audi’s clever gearing trickery makes any overtaking or sprinting attempts seem much quicker than the outputs suggest. It is brutal in acceleration, intoxicating when rocketing down the freeways yet surprisingly pliant and confident, perhaps almost too composed for comfort. The gear ratios are short, fixed and gives you absolutely no reason to drive with sedation. Don’t bother chasing fuel economy figures, because that’s what the A6 Hybrid in the garage does better.

But how does it fare in a drag race against a close rival, the Mercedes-AMG A45? It’s no contest, really. The Affalterbach-bred A-Klasse is the Hercules of its class, boasting the world’s most powerful 2.0-litre engine (381 hp and 475 Nm) underneath the hood. With AMG sports exhaust fitted, it sounds far better than the TTS too. Not all is lost for the TTS though, because I feel significantly more confident driving the Audi through snaky roads compared to the Merc-AMG. Just don’t ask which is the more comfortable car to drive.

Audi Malaysia is asking you to part with RM400k for what is essentially a Golf R made by a different German tailor. Is it worth the RM100k premium over the Golf R? We think not, because with the Golf R, you get adaptive suspension (Dynamic Chassis Control) that works better than the TTS’ magnetic damping, has two extra doors and similar driving dynamics.

For the brand conscious, the TTS is a no-brainer. It’s exquisitely ravishing and comes with impeccable build quality inside and out – things Audi have long and steadfastly established before the turn of the millennium. The novelty is a bonus far more fulfilling than anything else in its class, and the Bauhaus styling guarantees public attention wherever you drive it to.

In retrospect, the TTS is feral and all that, but I can have twice the fun and thrice the adrenaline shot in a Lotus Elise for half the price. I’d still turn eyes driving a Lotus, but the drab interior is not a sight for sore eyes, but that’s precisely not the reason why anyone would buy a Lotus anyway.

To this day, it’s still hard for me to think of a solid reason to buy the TTS. I’ve slept on it, dwelled on it and lied to myself about it, but nothing concrete ever came to mind. It may be close to 20 years old, but as it ages, so will its raison d’etre. Can the TT survive another generation being adrift in a sea filled with A45s and the likes of it? Unlikely so, but word has it that Audi is working on an all-new model called the R6. Until that day comes, the TT will have to fight relentlessly to stay relevant, otherwise its days are as good as numbered.