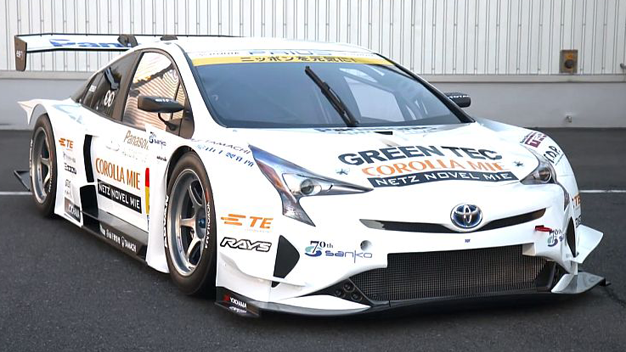 What we have here could be the fastest Toyota Prius in the world. Well, sort of. Toyota, through APR Racing, is set to race using the fourth-generation Prius for the GT300 category in this year’s Super GT championship.

Unveiled in last week’s Tokyo Auto Salon, this is not the first time a Prius is spotted in the realm of motorsports. The third generation Prius made its debut in the 2012 Super GT season under the APR Racing arm and won its maiden race the following year. Just like most machines in Super GT, the race car version of the Prius will be significantly different from the standard variant.

For starters, the 1.8-litre petrol engine that powers the standard Prius has been removed to make way for a mid-mounted 3.4-litre ‘RV8K’ V8 race engine. Although this V8 engine is capable of producing over 500 hp (as seen in its exploits in Super Formula open wheel racing), GT300 regulations have capped the car to produce at most 300 hp.

Toyota’s improved Hybrid Synergy Drive system has also been relocated to the passenger footwell for improved weight distribution. This means that the car is still technically a hybrid. It’s not all gloom and doom too, because F1 and World Endurance Championship LMP1 class prove that hybrid powertrain is beneficial for racing too!

Just like an ordinary GT car, there are aerodynamic enhancements to keep the car glued to the road. Such components include a front splitter, side fenders, rear diffuser and a huge wing that should do the trick. On the inside, the standard seats and dashboard have all been taken out to make way for a digital tachometer and a steering wheel plucked from a Formula One car.

The hot new racing Prius will make its racing debut in the opening leg of the 2016 Super GT session held in Okayama International Circuit on 9 and 10 April 2016.