Home News The Huracan is Lamborghini’s most popular model ever, with 20,000 units produced 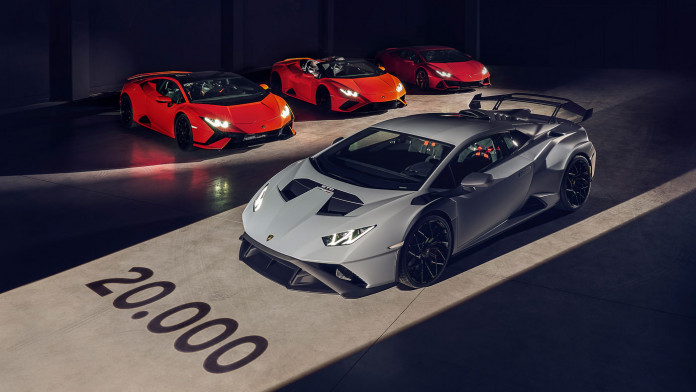 While the Urus may have sold 15,000 units in just four years, making it Lamborghini fastest-selling model, it’s not actually the marque’s most popular model ever… at least not yet. The title falls to the Huracan, which has just achieved another production milestone, with the 20,000th unit recently rolling off the marque’s Sant’Agata Bolognese production facility.

Finished in Grigio Acheso Matte and destined for a customer in Monaco, the milestone car number 20,000 is the track-focused Huracan STO, pretty much the hardest and fastest Huracan in the raging bull’s line-up – just too bad it’s not quite the right timing for it to be the latest Tecnica model.

ALSO READ: Artist blows up Lamborghini Huracan to sell its remains as NFTs

“At its unveiling we said that with the Huracan, Lamborghini is writing the next chapter in its great history,” said Automobili Lamborghini Chairman and CEO, Stephan Winkelmann. “The Huracan has delivered an evolution of design, technological know-how, driving adventures, track records and sales records since its launch.”

Now eight years into its lifespan, the Lamborghini Huracan model line-up now comprises 12 street-legal and three racing variants, the former in both coupe and convertible body styles. According to the company, 71% of customers have chosen the fixed-roof variant, and the other 29% the topless.

The Huracan’s best-selling market has been the United States, where over 32% of them were delivered over the last eight years, followed by the United Kingdom and Greater China. The high demand for the Huracan also contributed largely to the company’s 2021 sales record, accounting for 2,586 units of the 8,405 vehicles total that Lamborghini sold last year.

As we briefly mentioned above, the latest addition to the Huracan line-up is the recently-unveiled Tecnica variant. The rear-wheel-drive model claims to be the best of both worlds for both track and open road driving, as it shares the same engine with the STO, but still comes with many of the creature comforts one would expect from a street-going car – including rear-wheel steering.

Lamborghini is also heavily rumoured to be introducing another variant of the Huracan later this year, and has been said that it’ll likely be an off-road oriented model based on the Sterrato concept it unveiled in 2019!