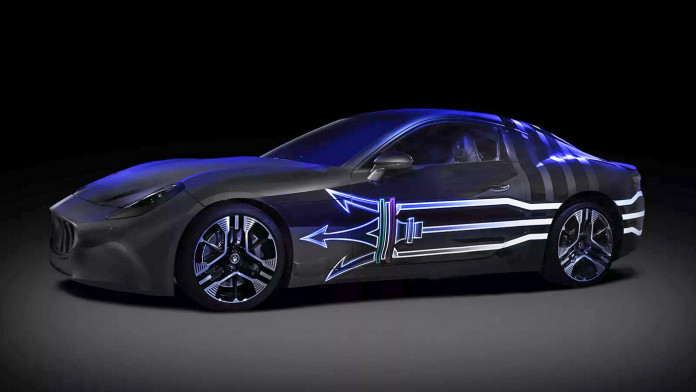 Just like virtually every carmaker out there today, Maserati is also currently going through an electric renaissance right now, with a plan to become fully electric by the end of the decade. They’ve already unveiled the hybrid Ghibli and Levante, and now it’s time for its first fully-electric powered model, the Maserati GranTurismo Folgore.

The Italian luxury carmaker has just released a couple of teaser photos for the all-new second-generation GranTurismo, which is slated for market debut in 2023. It’ll be offered in both petrol- and fully electric-powered guises, with the latter offering “way over” 1,200 hp.

Providing all that grunt are its three electric motors – two on the rear axle, and one in front – powered by a large “bone battery” mounted low and through the centre of the car.

As a result, the fully-electric GranTurismo Folgore will become Maserati’s most powerful model ever produced, promising a 0-100 km/h sprint time of under three seconds, towards a top speed of “over” 300 km/h. The company also says that its DC fast charging capabilities will be “top class”, whatever that means.

Not much else has been said about the GranTurismo Folgore, but at least we do get quite a good look at it, courtesy of Maserati’s teaser photos.

The second-generation model still retains its iconic long hood and rearward cab silhouette (the petrol engine for the non-EV version still needs to go somewhere), and the front end is also clearly inspired by the MC20 sports car, particularly seen on its slender headlights profile.

As per usual, the new GranTurismo coupe will also spawn a GranCabrio convertible twin, which will also be offered with Folgore electric power.

Aside from the GranTurismo Folgore, Maserati also plans to launch six new EVs by 2025, which it says will make it the “first luxury brand to complete the EV line-up”. This means that all of its models, consisting of two SUVs (all-new Levante and the upcoming Grecale), one sedan (new Quattroporte), and two sports (all-new GranTurismo) or supercars (MC20) will all be offered also in a fully-electric form by then.

All of these full EVs will wear the ‘Folgore’ badge, which means ‘lightning’ in Italian.