Maserati has just unveiled the Levante Hybrid, its second electrified model after the Ghibli Hybrid, at the 2021 Shanghai motor show. And just like the Ghibli, this one here also features a unique mild hybrid powertrain rather than the more commonly-seen plug-in hybrid system.

Designed to replace the existing diesel variant, Maserati says that the new Levante Hybrid is faster, yet still greener and more sustainable than the oil-burner.

Underneath the bonnet of the new electrified super-SUV is a 2.0-litre inline-four turbocharged petrol engine, paired to Maserati’s own e-Booster 48 volt mild-hybrid that recovers energy during braking and deceleration – the exact same powertrain found on the aforementioned Ghibli Hybrid.

Total system output is rated for 330 hp and 450 Nm of torque – the latter delivered from just 2,250 rpm thanks to the electric torque. Paired to the all-wheel drive system, the Levante Hybrid completes the 0-100 km/h acceleration sprint in six seconds, onward to a top speed of 240 km/h.

Even though the hybrid powertrain comes with all of the fancy electronics, the new Maserati Levante Hybrid surprisingly weighs less than the six-cylinder engine equivalent – both diesel and petrol – and on top of that, boasts even better weight distribution since the battery is placed at the rear, “optimally balancing the masses of the vehicle”, making it “more agile and fun to drive”, per Maserati.

To mark the Hybrid out from the regular ICE variants, the Levante Hybrid gets new cobalt blue-coloured details – which supposedly means electrified, according to Maserati – on both the interior and exterior.

On the former, these include the three side air ducts, brake calipers, and the C-pillar logo; for the latter, they can be found on the embroidered seams on the seats.

The trident logos all carry the new look, first introduced on the Maserati MC20, alongside the new oval logo on the bonnet which ditches the red colour, replaced wholly by white and what’s called a “Maserati Blue” colour.

The new Levante Hybrid model is launched with a new GT trim, furnished with GranLusso external styling features such as chrome elements on the front bumper and grille. The launch version featured in the photos here is also finished in a new metallic tri-coat colour called “Azzurro Astro”, and will be available as part of the Maserati Fuoriserie customisation programme. 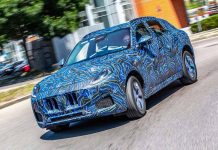 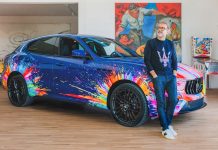