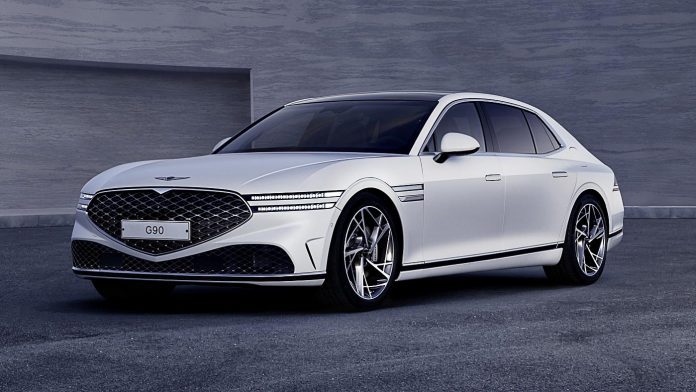 The all-new Genesis G90 has finally been detailed for its major market, the US. Hyundai’s luxury arm has certainly used as many new technologies as possible for this flagship limousine to compete with the likes of the latest Mercedes-Benz S Class, the upcoming new-generation BMW 7 Series, Lexus LS and Audi A8.

While Lexus has strongly defended the decade-old spindle grille design and BMW even illuminating the kidney grille, Genesis has gone a step further by replicating the emblem design onto the front fascia of the latest Genesis G90.

The large Crest Grille now comes with two G-Matrix patterns for a three-dimensional effect and are flanked by ultra-slim Two-Line headlamps. Looking like a pair of wings to the central crest as used in the brand’s emblem, the headlamps’ slim design was made possible by intercrossing the lends of the DRLs with turn indicators, the high beams and the Micro Lens Array (or MLA) technology-powered low beams.

The low beams combine circa 200 micro-optic lenses per module with ultraprecise technology. In the Korean models, the Two-Lines lighting are extended to the fender and even illuminates and functions as repeaters for turn indicators!

Dimensionally, the new Genesis will continue to be offered in two wheelbase variants. The standard wheelbase is at 3,180 mm, a shade shorter than the German rivals. However, at 3,370 mm, the long-wheelbase Genesis G90 will be the longest in the segment, beating the Mercedes-Maybach by 5 mm.

At 3.6 m, Hyundai’s latest Casper mini crossover can almost fit in between the wheels of the new Genesis. More about this little cute car here!

The signature two-line lighting strip continues to the rear, albeit just functioning as tail lamps. A cleaner, simpler look is conveyed via the Genesis lettering being spelt out with ‘crest’ shaped decorative exhaust tips at the corner of the bumper.

Inside, customization and packages allow plenty of configurations. Being a limousine targeted to the heads of states and VVIPs, the rear seats get plenty of adjustments, ventilation, massaging functions and upholstered by the softest Nappa leather with a quilt pattern.

The new Genesis G90 also provides a new experience to occupants with thoughtfully designed storage spaces such as an independent tray for magazines and books in the C-pillar area.

RELATED: The Johor Royal Family has an ultra-rare Genesis G90 Stretched variant. Take a look at the interior here!

Perhaps the single most outstanding feature inside the new Genesis compared to rivals is the removal of the door handles. Lexus did pay plenty of attention in crafting the inner door handles of the LS 500 and ES 250 models, but for Genesis, complete removal in place of an electric operation speaks the advanced technological image of the flagship model.

The EasyClose system closes to doors at a press of a button which are placed inboard as well as on the doors. The outer door handles, also electrically operated, meanwhile extend outwards to greet the driver and occupants.

Cabin air is well purified, scented and energized by an advanced air-conditioning system while the driver can even perform secured payments over-the-air via the infotainment system and fingerprint authentication system.

Genesis is taking on the EV revolution with the GV60, also their smallest in the line-up

Bang & Olufsen meanwhile will provide the best audio system for the new Genesis G90 via a Premiere 3D Sound System with 23 speakers and Acoustic Lens Technology that optimizes sound quality through pop-up tweeters and in the headlining.

Powering the limousine from South Korea is a twin-turbocharged 3.5-litre V6 with outputs of 380 hp and 530 Nm of torque. Rear-wheel drive via an 8-speed automatic transmission is standard, with all-wheel drive made standard for the long-wheelbase variant.

Apart from the usual multi-chamber air suspension system with adaptive control, the suspension system also scans the road ahead as well as translate navigation data to better prepare the ride quality for the most important occupants.