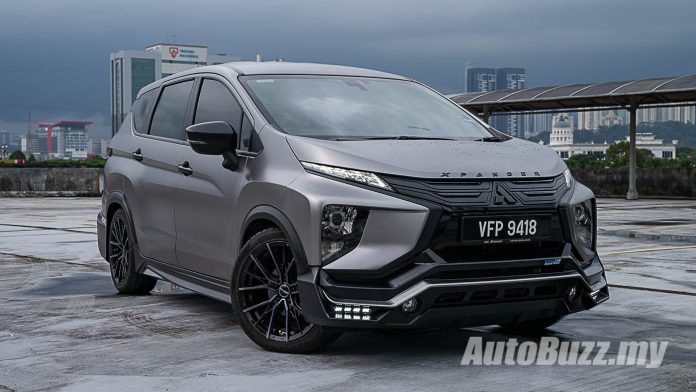 Mitsubishi Motors Malaysia introduced the Mitsubishi Xpander 7-seater in November last year and shortly after its launch a media drive was organised to allow us to have a taste of what it’s like.

At the media drive, MMM surprised us with two Xpanders on display but they didn’t look anything like the ones in the brochure. As it is immensely popular in Indonesia, the display of those vehicles was meant to show us how customisable the Xpander is, and how it would look with just a bit of effort.

For starters, the original paint of the car which consists of Red Metallic, Quartz White Pearl, Graphite Grey Metallic, and Jet Black Mica options were replaced with a dark grey wrap done by Speedline Industries. The wrap is complemented with 18-inch Razer wheels and low-profile tyres.

The elaborate body kit, which consists of a front bumper and splitter, side skirts, and rear bumper with diffuser and fake exhaust tips.

Lastly, to match the new sleek looks of Mitsubishi’s new 7-seater, a set of HWL adjustable coilovers, with height and damping adjustment functions have replaced the original suspension which has influence from the Mitsubishi Evo X.

All in, it cost around RM15,000 to performance these modifications but the results reflect beyond that. It may not be to everyone’s taste but most who have seen it responded with a ‘thumbs up’.

The Xpander comes with a 1.5-litre engine with 105 hp and 141 Nm. Drive is sent to the front wheels via a 4-speed automatic gearbox.

As for exterior features, you get Bi-LED reflectors, LED position lights, and halogen fog lights that also act as daytime running lights. At the rear, the taillights are LED combination units. Completing the exterior, the Xpander comes camera on both side mirrors, keyless entry, and 16-inch wheels. As standard, the Xpander comes with 205 mm ground clearance.

Inside, the Xpander comes with a huge 9-inch display paired to 6-speakers, with Apple CarPlay and Android Auto connectivity. Even more impressive, it comes with a 360-degree surround view monitor.

The Xpander is priced at RM91,369 including SST exemptions and is accompanied with a 5-year unlimited mileage warranty.