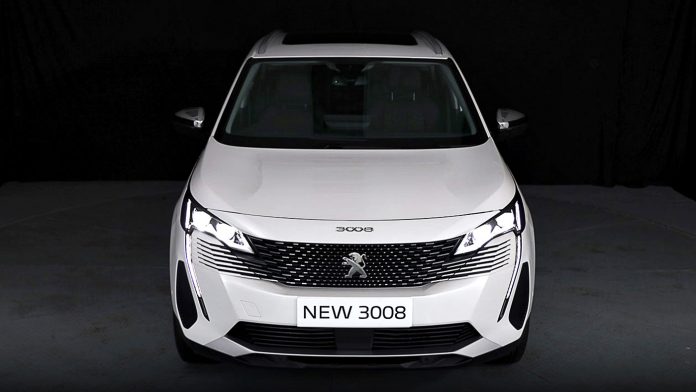 Belfort Automobile, the official importer and distributor of Peugeot vehicles in Thailand, has introduced the new facelifted Peugeot 3008 over the weekend. Available in just a single 3008 Allure variant, the model is priced at THB1.689 million.

Globally launched last year, the facelift 3008 model places a strong emphasis on the family look at the front. The front fascia is completely reworked to showcase the company’s new frameless grille with horizontal fins extending to the bottom of the new headlamps.

The new LED headlamp design is neatly integrated with the new grille and also feature a striking vertical DRL, mimicking the shape of a lion’s fangs. The ‘fangs’ also functions as sequential turn indicators. Unlike the all-new Peugeot 308 hatchback, the Lion emblems maintain the outgoing design. At the rear, the tail lamps are also reworked to feature a 3D internal structure with all-LED lighting and covered by smoked glass.

Peugeot enters the new decade with a new logo- return of the Lion’s head. More about the new design here.

A new pair of roof rails, panoramic moonroof, a hands-free powered tailgate and 18-inch alloy wheels wrapped with 225/55R18 tyres complete the new look of the facelifted Peugeot 3008 that is imported from Malaysia.

Inside, the new Peugeot 3008 has been updated to the new i-Cockpit design which makes use of a larger, wide-format 10-inch infotainment display with Apple CarPlay and Android Auto connectivity. A new wireless charger is located under the panel of switches. The 12.3-inch driver’s instrument cluster has been updated for better viewing plus graphics.

Naza has ended its distributorship of Peugeot vehicles in Malaysia, with Bermaz Auto taking over. Find out more about the transition here.

Other interior features include power-adjustable front seats with lumbar support for the driver, leather upholstery, ambient lighting and a dual-level luggage floor. The safety features included as standard in this new Peugeot 3008 Allure include the blind spot warning, lane departure warning and driver attention assist. Parking aid is also supplemented by a rearview camera.

The powertrain of the new Peugeot 3008 Allure maintains the outgoing 1.6-litre turbocharged four-cylinder engine with outputs of 167 hp and 245 Nm of torque, paired with an ‘EAT’ 6-speed automatic transmission. Similar to the pre-facelift model, a terrain drive mode dial called Advanced Grip Control with Sand, Mud and Snow modes is available too.

This is the SUV shootout you have been requesting! Watch how each of these SUVs impress our special judges!

The Mazda CX-5 2.0 SP with equivalent features that is also imported from Malaysia (Inokom plant in Kulim, Kedah) is priced at THB1.56 million (RM193k).

Belfort Automobile also plans to unveil the smaller Peugeot 2008 SUV by the end of the year.