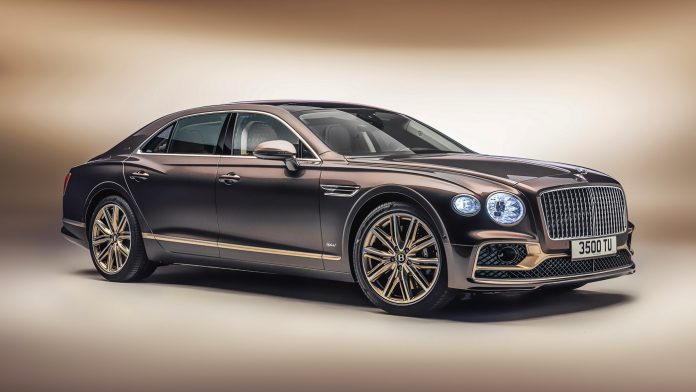 To celebrate the launch of its newest model, the Flying Spur Hybrid, Bentley has unveiled a new limited-run launch variant, called the Odyssean Edition, that’s supposed to offer a glimpse into the brand’s future.

Taking inspiration from the EXP 100 GT concept, the new Odyssean Edition will highlight the use of sustainable materials in its interior, which will become a big part of the brand’s Beyond 100 electrification strategy moving forward.

These materials include the new tweed panels that are made from 100% British wool, which helps break up the acres of leather usually found on the inside of a luxury car like a Bentley Flying Spur. As an option, customers can also upgrade the deep pile mats to lambswool rugs.

That’s not to say that there’s no leather here, though, because there is, and a whole lot of it. But the hide used for the cabin, called Autumn, was selected specifically for its sustainability and long-term durability.

All new Bentley models will be fully-electric from 2030 onwards. Read more about the brand’s Beyond 100 plan here.

The company also recently joined the Leather Working Group, a trade body that sets standards for the ethical use of the material. Bentley sources its leather from a single supplier in Italy, and uses advanced laser cutting tools to maximise the utilisation of each hide, while any leftover scraps are sent for use elsewhere.

As for the leather in the Odyssean Edition itself, it gets the usual “lofted diamond” pattern that’s unique to the Bentley Flying Spur, but with a unique embroidery style which blends the thread colours into a gradient across the width of each seat, as a nod to the ombré finishes seen in the interior of the EXP 100 GT.

The dashboard is covered in what Bentley calls the open pore Koa veneer, which uses 90% less lacquer than the other high-gloss veneers. Using just three ultra-thin layers of lacquer, which totals to only 0.1 mm in thickness, Bentley says that this allows customers to enjoy the “natural surface texture and aesthetic of the wood”.

The centre console, meanwhile, gets a more “regular” black Piano Linen veneer, to offset and balance the three-colour leather scheme in the rest of the cabin.

Check out the insane attention to detail in the interior of the Bentley Flying Spur, now available in Malaysia!

While the highlight of the Odyssean Edition Flying Spur Hybrid is obviously inside the cabin, Bentley has also given the limited-run model a few unique touches on the exterior. Most noticeably, it’s littered with a new Pale Brodgar accent colour that can be found on the 21-inch wheels, bumpers, and the lower character line trim element that wraps around the rear of the car.

Bentley has selected a palette of six recommended colours to match the trim and interior colour scheme, but of course, customers can still choose any colour that they like from the thousands on offer from the firm.

The Flying Spur Hybrid Odyssean Edition is also fitted with Bentley’s Touring Specification, which comes with the retractable illuminated ‘Flying B’ bonnet mascot, LED puddle lights, and the rotating centre console display on the inside.

Tying up the aesthetic makeover on the special edition are the bespoke Odyssean Edition door sill plates – the design of which is mirrored onto the exterior badgings on the D-pillars.

The world’s largest carbon fibre wheel is made by Bentley for the Bentayga. Check out the 22-inch madness here!

Powering the Odyssean Edition is the standard powertrain from the new Flying Spur Hybrid, which features a 2.9-litre twin-turbocharged V6 mated to an 136 hp electric motor.

Bentley did not reveal the price of this special edition Flying Spur Hybrid model, though it’ll be limited to about 300 units only.