Home News The Bentley EXP 100 GT: The future of grand touring will read... According to Bentley’s crystal ball, when its Bentley EXP 100 GT concept is realised in 2035, the vehicle will be centred on artificial intelligence that listens in, anticipates and serves up what occupants want. It will also be fully electric and autonomous, but will still roll on tyres and wheels (no flying cars here).

Conceived as a concept showpiece to celebrate Bentley’s 100th year in existence, you could say that the EXP 100 GT is conceivably a peek into what a Continental GT coupe could look like in 16 years’ time, and it is grand, sleek and luxurious, yet recognisably Bentley with circular headlights and its R-Type Continental-inspired rear haunch, but with really long scissor doors that open upwards to stand at three metres tall!

But the EXP 100 GT is much more than just being luxurious and decadent, it’s also conscientious and sustainable through the clever use of materials such as exterior paint made from recycled rice husks, 100% organic leather-like textile from wine making and British Farmed Wool carpets and embroidered cotton interior surfaces.

Occupants can self-drive or lounge in the highly configurable, bespoke hand-made cabin, allowing the Bentley Personal Assistant to ‘curate personal driving experiences’ with interactions via gestures and touch. The ‘brain’ of the car revolves around an illuminated Cumbria Crystal control centre that’s entirely handcrafted, in England of course. 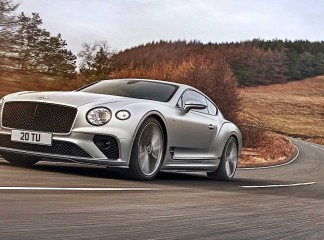 Looking for a more “affordable Bentley”? Here’s how!